Batman: Return of the Caped Crusaders (2016) 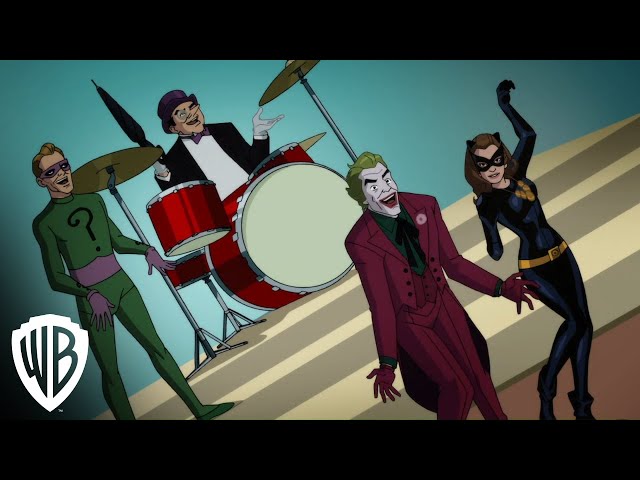 At stately Wayne Manor, Bruce Wayne and his youthful ward Dick Grayson watch their favorite show, Gotham Palace. During the programming, a band that was supposed to play on the show is revealed to be hidden and replaced by four of the Dynamic Duo's greatest villains; the Joker, the Penguin, the Riddler, and Catwoman. Bruce and Dick suit up as Batman and Robin and head towards the Gotham City Police Department, where they receive a riddle from Commissioner Gordon and Chief O'Hara. They discover that the crooks are robbing the Acme Atomic Energy Laboratory of the Replication Ray that was invented by Dr. Nichols. The Replication Ray has the power to make a perfect duplicate out of anything. After a brief fight, the criminals manage to escape Batman, but leave behind a clue that leads the Caped Crusaders to their lair in an abandoned TV dinner factory. While discussing what to do with the Replication Ray, Catwoman reveals her plan to make Batman join their side with a scratch from a substance called "Batnip". After Batman and Robin break in, they are defeated by the criminals and trapped on a frozen food tray heading towards a large oven. Catwoman uses her Batnip on Batman, but he is supposedly unaffected by it. The two escape the trap after the villains leave the factory. Back at stately Wayne Manor, Bruce starts showing signs of aggression after Aunt Harriet nearly discovers the Batcave. He blames Alfred Pennyworth for the incident and fires him, leaving the butler to wander on the streets homeless. After days of not finding Joker, Penguin, Riddler and Catwoman, Batman figures out that the four crooks are no longer on Earth and have hijacked a space station. The two heroes go into space with the help of their Bat-Rocket.

The film Batman: Return of the Caped Crusaders was scheduled to be released on October 6, 2016 (NYCC), on October 10, 2016 (United States) and on October 11, 2016 by Warner Bros. Pictures, Fathom Events and Warner Home Video.

Batman: Return of the Caped Crusaders got high rating from critics. The audience also likes the film.