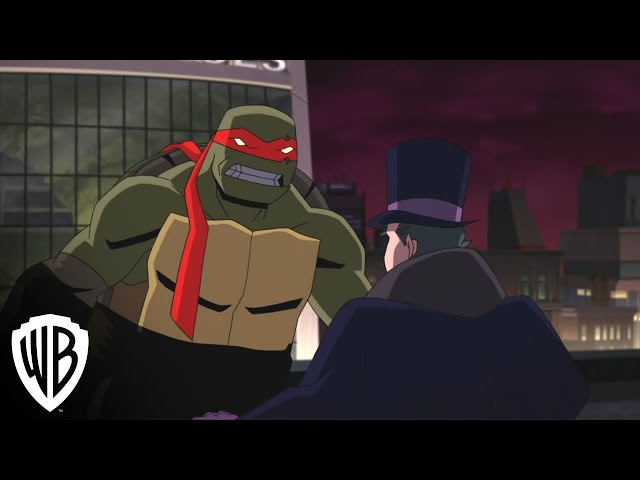 While touring at Powers Industrial, Barbara Gordon witnesses a powerful generator being stolen by the Foot Clan and also spots four mysterious creatures during the robbery that she believes are metahumans. She informs Batman, who fights the Foot Clan at Wayne Enterprises before he is defeated by the Shredder. The four metas Batgirl spoke of are actually the Teenage Mutant Ninja Turtles, who have arrived in Gotham to stop Shredder's schemes and find out who his new ally is. After defending Wayne Enterprises from the Penguin, the Turtles meet Batman in an alley and proceed to fight as both sides believe the other is working with the Shredder. The Turtles are forced to retreat when Batman proves to be more experienced in combat. After researching Batman and his reported locations, Donatello manages to lead the Turtles into the Batcave, where they have a brief scuffle with Robin. After Batman and Batgirl arrive, the Turtles introduce themselves and offer their assistance to the Bat-Family when they realize they have the same goal. Robin reveals to the group that Shredder and the Foot Clan are working with Ra's al Ghul and the League of Assassins. In exchange for the use of the Lazarus Pit, which prolongs the life of whoever bathes in it, Shredder and the Foot Clan aid Ra's in building a machine that will transform everyone in Gotham into insane mutants using a mixture of mutagen and the Joker's venom. Ra's and Shredder break into Arkham Asylum, giving Joker a canister of mutagen in exchange for the formula for his venom.

The film Batman vs. Teenage Mutant Ninja Turtles was scheduled to be released on March 31, 2019 (WonderCon Anaheim), on May 14, 2019 (Digital) and on June 4, 2019 (4K Ultra HD, Blu-ray and DVD release) by Warner Bros. Home Entertainment, Warner Home Video and Nicktoons.