Scooby-Doo! and the Gourmet Ghost is a 2018 American animated comedy mystery film directed by Doug Murphy. 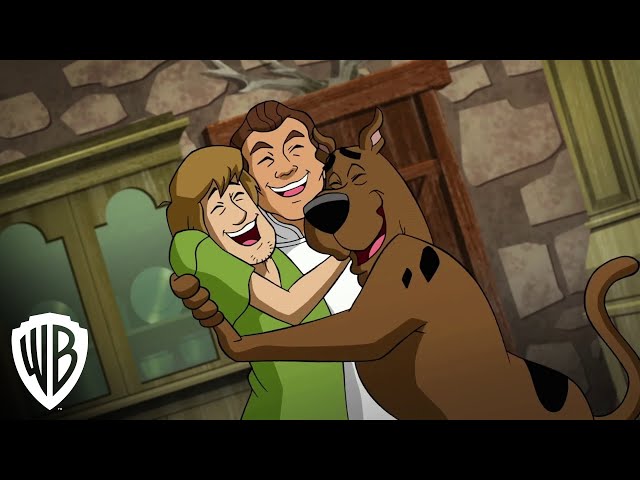 The gang are en route to the Rocky Harbor Inn, where Fred's uncle Bobby Flay invited them to stay. They arrive, and Fred is surprised to learn that his uncle is a world-famous chef. Bobby shows them the lobby, where they see a portrait of Fred's ancestor Edward Flay. The townspeople have yet to find any clues about his disappearance. Bobby and the gang proceed to the best part of the inn, a very high-tech cooking arena. They meet Giada De Laurentiis and her cat Bella, and Marcus Samuelsson and his wife Maya Haile. The inn's groundskeeper Jeremiah Noseworthy shows up, and quickly leaves mentioning a red ghost. Bobby elaborates that when Edward disappeared back in 1780, he was alone in the inn and people heard him cry out Red Ghost before he disappeared. The inn has been vacant because of the ghost, but since they reopened it, people claimed to have seen it. The next day on television, Gail announces the big show at the inn and has an interview with Jeremiah, who blurts out that Edward was a traitor. Nacho sees Skip telling him that he is leaving out of stress about the Red Ghost, but Skip changes his mind and goes back to lie down. A businessman named Bradley Bass comes in and tells Bobby that he is sitting on a gold mine, but Bobby refuses to sell. Daphne runs up to Bobby telling him something is happening in the arena. Henry Metcalf, who wrote a famous book on the inn, shows up. He gives Bobby a folder of papers and continues by saying during the Revolutionary War, Edward welcomed soldiers to his inn and wrapped the dishes up in these papers for take-out.

The film Scooby-Doo! and the Gourmet Ghost was scheduled to be released on July 22, 2018 (San Diego Comic-Con International), on August 28, 2018 (Digital) and on September 11, 2018 (DVD) by Warner Bros. Home Entertainment and Warner Home Video.

IMDB: Scooby-Doo! and the Gourmet Ghost

Wikipedia: Scooby-Doo! and the Gourmet Ghost