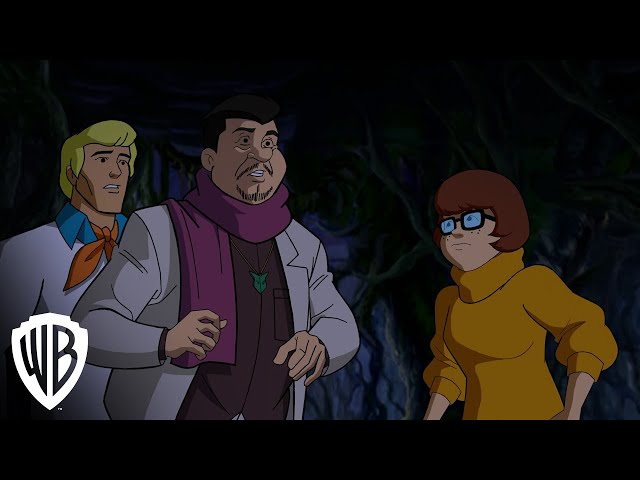 A few months have passed since the events from the last film, and Fred is still depressed about selling the Mystery Machine as the gang hang out at the malt shop. Due to the previous experiences of mystery-solving, and the sheriff forcing the gang to retire from mystery-solving, Shaggy and Scooby-Doo make the gang promise that they won't solve any more mysteries. A TV show then announces that Shaggy has won a trip to a tropical paradise on an island in which he is allowed to take the gang with. As the gang sail towards the island, Velma, Fred, and Daphne realize the surroundings are not very tropical and more swamp-like. They ask the captain where they are going in which he responds 'The darkest reaches of Davy Jones' locker' stating that zombies inhabit the island. This reminds Daphne of the last time they visited an island with zombies on it. After reaching the island, two people tell the gang to get out and turn back but the gang proceeds. During their trip onto the island, a mysterious cat creature slashes a tree which nearly crushes the car the gang are in. Velma also notices one of the tires on the car to be slashed as well. The gang continues to walk towards their hotel, which is strangely named Moonstar Island Resort, reminding the gang about their visit to Moonscar Island with the events involving the cat creatures and the zombies. Inside the hotel, they meet the hotel manager, "Alan Smithee", and a few other employees who look like the people they met on Moonscar Island. During a massage, Scooby and Shaggy get attacked by zombies and resort to hiding in a cupboard in the kitchen. In the cupboard, they accidentally press a button, causing them to fall into a cave below the house. The cave has the statues of the cat creatures from Moonscar Island, causing confusion from Shaggy and Scooby. They are attacked by another zombie and flee upstairs.

The film Scooby-Doo! Return to Zombie Island was scheduled to be released on July 21, 2019 (San Diego Comic-Con International), on September 3, 2019 (Digital) and on October 1, 2019 (DVD) by Warner Bros. Home Entertainment and Warner Home Video.