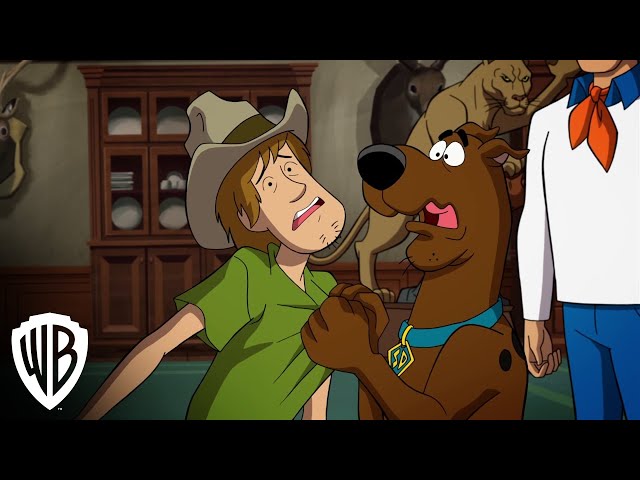 The Mystery Incorporated gang goes to visit the Crazy Q Dude Ranch, which is owned by Shaggy Rogers' long lost cousin, Tawny Rogers. When the gang arrives, the residents scream in fright at the sight of Shaggy, and claim he is a ghost. After the gang meets Tawny, she explains that years ago, the ranch was once haunted by a ruthless western outlaw named Dapper Jack and points out that Shaggy looks just like him, due to the fact that he is Jack's descendant. Tawny says Dapper Jack's ghost has been terrorizing the ranch and if he continues, she will be forced to sell it. Afterwards, the gang begins investigating so Tawny will not have to sell the ranch. After investigating Jack's grave, and a few close encounters with his ghost, the gang solves the mystery and decide to trap the ghost. That night at a rodeo with a grand prize of $10,000, Scooby-Doo helps a young boy get over his fear of horses while Shaggy rides a horse very successfully, much to the surprise of his friends. Later, Shaggy gives the prize money to Tawny to help her with the ranch. At that same moment, Velma Dinkley reveals that the ghost is actually a ranch hand named Kyle who was trying to steal the money. After this, the gang learns that Dapper Jack was not really an outlaw but a kind soul. The town sheriff Rufus Carmichael killed him and framed him for all those crimes and Kyle used the false legend for his scheme. However, the gang also learns that Kyle was not alone and Velma announces that a man named Rafe was working with him. After Rafe confesses that he owns the company that wants to buy Tawny's ranch, he then steals the money and runs away. He is chased by Shaggy and Scooby who force him off the track and retrieve the money.

The film Scooby-Doo! Shaggy's Showdown was scheduled to be released on January 31, 2017 by Warner Home Video.