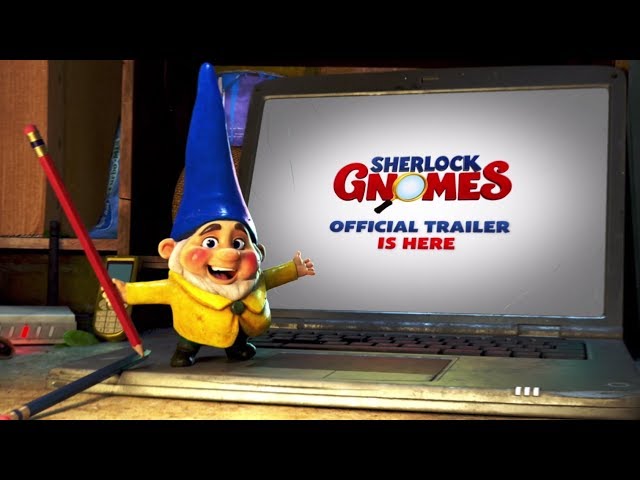 Sherlock Gnomes and his assistant, Gnome Watson, storm London's natural history museum where their nemesis, a pie mascot named Moriarty, is holding gnomes hostage. After a brief battle, Moriarty is seemingly crushed by a dinosaur skeleton. Meanwhile, Gnomeo and Juliet and their fellow gnomes move to London, where the couple are declared the new leaders of the garden. Feeling neglected by Juliet's focus on improving the garden, Gnomeo leaves to find a flower centerpiece, but is nearly caught in a shop, forcing Juliet to rescue him and leading to a heated argument between the couple with Juliet harshly telling Gnomeo "the garden can't wait, you can!". They return to the garden to find all the other gnomes missing. Sherlock and Watson arrive to investigate; after Gnomeo and Juliet help them escape a sewer flood, Sherlock agrees to join forces. A clue from Moriarty, whom Sherlock believes survived their last encounter, leads them to Chinatown. They find the next clue at Curly Fu's Emporium, and escape a group of Maneki-nekos whom Sherlock had previously offended. They arrive back at the natural history museum, where Gnomeo suggests they look inside but Sherlock decides to wander an art gallery instead, followed by Juliet. Gnomeo goes into the museum anyway with Watson in pursuit, only to be kidnapped by a Gargoyle who seemingly smashes Watson. Gnomeo is brought to the rest of the gnomes and informed they will be smashed during a fireworks celebration the following evening. Meanwhile, Sherlock figures out the next clue is at the royal park. He and Juliet disguise themselves as a squirrel to get the clue from a dog whom Sherlock has an unfortunate history with (and describes as "the hound owned by the Baskervilles"), and manage to evade the dog on a lawnmower.

Sherlock Gnomes got low rating from critics. The audience dislikes the film either. Audiences polled by CinemaScore gave the film an average grade of "B+" on a scale ranging from A+ to F.