Watch the official trailer for The Greatest Showman 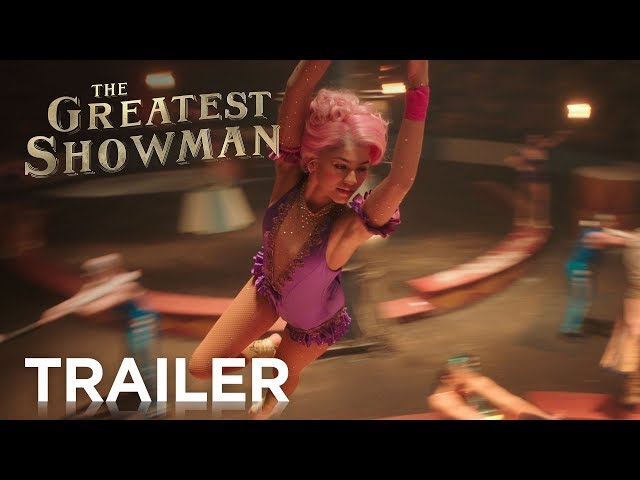 What is The Greatest Showman about?

In the mid-19th century, P. T. Barnum (Hugh Jackman) and his troupe perform a show at the circus ("The Greatest Show (Part 1)").
As a child, Barnum and his tailor father Philo work for the Hallett family. He loves their daughter Charity (Michelle Williams) who is being sent to finishing school. The two keep in touch through letters ("A Million Dreams"), eventually marrying and raising two daughters, Caroline and Helen, in New York City. They live a humble life; though Charity is happy, Barnum craves more.
Barnum loses his job as a clerk at a shipping company after the company goes bankrupt, and returns home for Caroline's birthday ("A Million Dreams (Reprise)"). He takes out a loan from a bank, deceiving them into accepting his former employer's lost ships as collateral. He uses this loan to set up Barnum's American Museum in downtown Manhattan, an attraction showcasing various wax models. Initially, sales are slow. On the suggestion of his children to showcase something "alive", Barnum searches for "freaks" to serve as performers for his museum ("Come Alive"). He gathers a large group of them, including bearded lady Lettie Lutz (Keala Settle). This attracts a large audience despite protests and poor reviews from well-known critic James Gordon Bennett (Paul Sparks), prompting Barnum to rename his venture "Barnum's Circus".
Searching for ways to further his reputation, Barnum meets playwright Phillip Carlyle (Zac Efron) and convinces him to join his venture ("The Other Side"). Phillip is mesmerized by the African American trapeze artist Anne Wheeler (Zendaya), but he hides his feelings. During a trip, Phillip arranges for Barnum and his troupe to meet Queen Victoria (Gayle Rankin). Afterwards, Barnum convinces famed Swedish singer Jenny Lind (Rebecca Ferguson) to perform in America with him as her manager. Lind's first American performance is a rousing success ("Never Enough"); during the song, Phillip and Anne are spotted by Phillip's parents as they are holding hands. As Barnum gains favor with the aristocratic patrons, he begins to distance himself from his troupe as he advises them to work on their performances without him. Dejected, they decide to stand against their local harassers ("This Is Me").

Who's in the The Greatest Showman cast?

Here is the full cast and characters of The Greatest Showman.

When is The Greatest Showman released in cinemas?

What are The Greatest Showman film specifications?

The film The Greatest Showman is rated with "PG" rating.

What are critics and audiences saying about The Greatest Showman?

The Greatest Showman got average rating from critics. But the audience likes the film. Audiences polled by CinemaScore gave the film an average grade of "A" on a scale ranging from A+ to F.

Other sites about The Greatest Showman

More information about The Greatest Showman you can get at: