The Mummy is a 2017 American horror action-adventure film directed by Alex Kurtzman.

Universal Pictures on Thursday, May 18, 2017 released the trailer:
The Mummy - Official Trailer #3 . 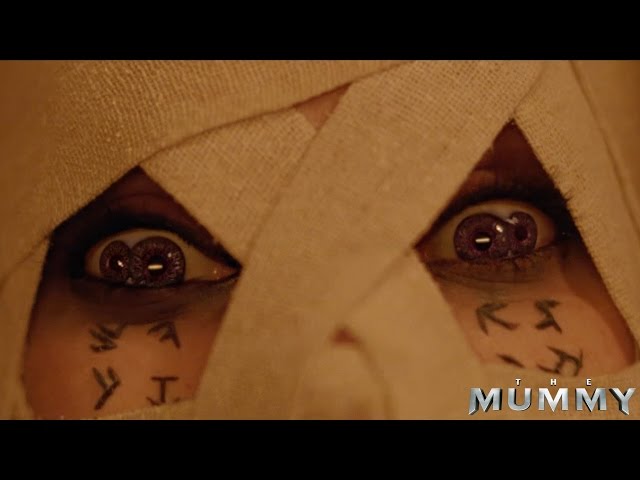 In present-day London, construction workers discover the tomb of a crusader knight who was buried with an Egyptian ruby in 1127 AD. In Iraq, U.S. Army soldiers Sergeant Nick Morton and Corporal Chris Vail discover the tomb of Princess Ahmanet, who attempted to summon the deity Set; she was caught and mummified alive. They and archaeologist Jenny Halsey fly Ahmanet's sarcophagus to Britain. During the flight, Chris is possessed by Ahmanet through a spider that had bitten him in the tomb, attacks the others, and is killed by Nick. Many crows attack the plane, causing it to crash, killing everyone except Jenny, who escapes by parachute. Nick returns to life in a morgue. Chris's ghost appears and tells him he has been cursed by Ahmanet, who seeks to use him as a vessel for Set. Ahmanet's mummy escapes from the sarcophagus and begins feeding on people to regenerate her body; she recovers the Dagger of Set and turns workers into zombies which trap Nick and Jenny. Soldiers appear and subdue Ahmanet. Their leader, Dr. Henry Jekyll, explains that Jenny is an agent of Prodigium, a secret society dedicated to hunting supernatural threats. Nick and Jenny then discover Dr. Jekyll intends to allow Set to possess Nick completely in the belief that this will render Set vulnerable. Jekyll then transforms into Edward Hyde; Nick stops him with a serum Jekyll invented to prevent him from undergoing this transformation, and he and Jenny escape. Ahmanet finds them, regains the dagger, summons many crusader zombies, and creates a large sandstorm in London; Nick and Jenny escape her. The crusader zombies kill the Prodigium soldiers; Ahmanet recovers the ruby, combining it with the dagger in order to free Set.

The Mummy got low rating from critics. The audience dislikes the film either. Audiences polled by CinemaScore gave the film an average grade of "B-" on a scale ranging from A+ to F.