"WarioWare Gold" is a party video game by Nintendo, developed by Intelligent Systems and Nintendo EPD.

Is there a trailer for WarioWare Gold? 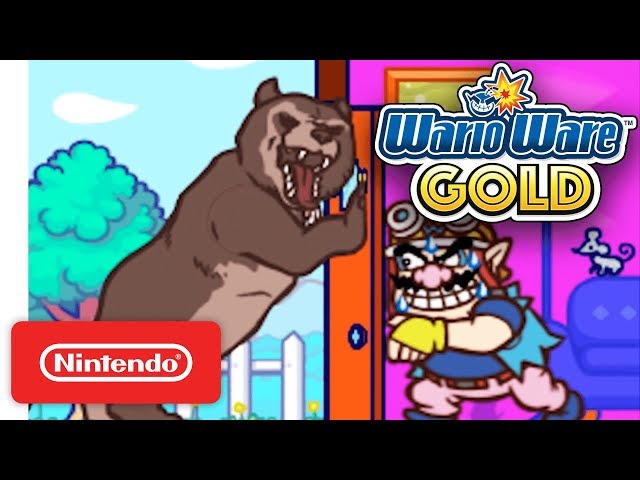 What are WarioWare Gold gameplay features?

In WarioWare Gold, the player must complete "microgames", which are small minigames with short time limits. If the player succeeds in a microgame, the game moves onto the next. If the player fails, they lose one of four lives. If the player runs out of lives, the game ends and the player's high score is displayed, which is determined by how many microgames were passed. During gameplay, the game will naturally speed up every few microgames, with its difficulty increasing each time a boss microgame is completed.
The microgames featured in Gold return from multiple games in the series, including WarioWare, Inc.: Mega Microgames!, WarioWare: Twisted!, WarioWare: Touched!, WarioWare: Smooth Moves, WarioWare: D.I.Y., and Game & Wario, in addition to new ones for a total of over 300. These microgames involve pressing buttons, tilting the system, touching the touch screen, and blowing on the system's microphone. Gold also features full voice acting, the first WarioWare game to do so, with an additional unlockable feature allowing players to overdub their own voice over the game's cutscenes.
Having run out of money following a treasure hunt in the village of Luxeville, the greedy Wario decides to organize a gaming tournament in Diamond City, convincing his friends to design some new microgames for the event. For an entry fee of ten-thousand coins, he offers a ten-million coin prize to the tournament's winner, although he secretly plots to take all the prize money for himself. While the player competes in the tournament, a girl from Luxeville named Lulu calls Wario out and begins training to challenge him, seeking to retrieve a treasure Wario stole from her village.
The rest of the game consists of self-contained stories for all of Wario's friends. Two girls are enamored by Jimmy T. and want to take pictures of him, Mona meets with Joe and tries to find a dress to wear for her party, Dribble and Spitz fight off UFOs with their space-faring taxi, 5-Volt follows along with a workout routine on TV, Ashley and Red fight a demon with a voracious appetite named Hum Gree, Dr. Crygor and Mike go looking for mushrooms in the forest when Crygor is suddenly chased by a crazed robot, 18-Volt participates in a rap battle against 13-Amp to win back a classmate's stolen games, Penny Crygor makes a cure for Dr. Crygor who became poisoned after drinking her voice-changing elixir, Kat and Ana compete in an eating contest to try and earn their ninja learner's permits, Fronk helps 9-Volt with his math homework by treating it like a role-playing game, Young Cricket and Master Mantis "train" at an amusement park by riding a merry-go-round and Orbulon abducts "hams" for a fast food restaurant so they can be used to make hamburgers.

What are WarioWare Gold game specifications?

WarioWare Gold is available for the following platforms: Nintendo 3DS.

Where to buy and download WarioWare Gold video game?

More information on where to buy and download "WarioWare Gold" video game, also reviews of gameplay features and game requirements you can get on the following websites.

WarioWare Gold on Wikipedia is available at: