Is there a trailer for Semper Fi movie? 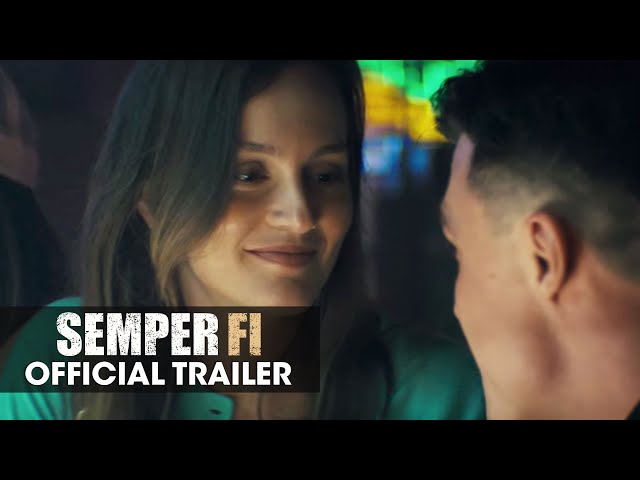 What is Semper Fi movie plot?

In 2005, close friends Cal (Jai Courtney), Milk (Beau Knapp), Jaeger (Finn Wittrock), Snowball (Arturo Castro) and Oyster (Nat Wolff) bowl at Westside Lanes in Bridgewater, NY. Their nicknames are carved into their respective ball. After some roughhousing, an employee named Tony (Rob Mello) threatens to have them removed, but they show him Cal's badge - he is the police. Cal makes a deal with Tony to buy drinks for them all if Oyster can bowl 3 strikes - otherwise they'll leave. Oyster's third roll is a miss because he does it blindfolded, but with much laughter and joking, Tony doesn't throw them out. The camaraderie is palpable.
In their day jobs, Cal, who's full name is Chris Callahan (Jai Courtney), is a police officer. Milk, who's last name is Milkowski, is a fire fighter at the Ernest J Cooper Memorial Fire Station. Jaeger is an auto body detailer. Snowball is a dockside crane operator. And Oyster, who is Cal's half-brother, works at a diner.
Together, all five serve in the Marine Corps Reserve at Fort Drum, where Cal is their Staff Sergeant. Oyster picks fights, forgets his cap and is generally reckless during their time there, which earns him time cleaning toilets. The resentment between brothers builds. They're in training because they'll soon be called to active duty.
At home, the brothers argue. Oyster has had prior felony convictions, and Cal reminds him that one more will land him back in prison. Oyster spouts his big dreams, which Cal feels are empty. Cal has pulled his life together, something he wishes Oyster would do. Their arguing turns into a scuffle, where Oyster accidentally gets hurt. Cal tries to make amends to his brother through a closed bedroom door as Oyster sulks and plucks his guitar.

Who plays who in the Semper Fi movie cast?

Here is the full cast and characters of "Semper Fi" movie. Actors and actresses are sorted mostly in credits order.

What are Semper Fi filming details?

The duration of the film is 99 minutes. The film's budget is $6.6 million.

"Semper Fi" movie is rated "R", according to the MPAA film rating system.

What are critics and audiences saying about Semper Fi movie?

More information and reviews on "Semper Fi" movie you can get on the following websites.

Semper Fi on IMDB is available at:

Semper Fi on Wikipedia is available at: