Here are "The Unholy" movie trailer, plot summary, full cast and characters, release date, streaming services and everything we know so far.

Is there a trailer for The Unholy movie?

Sony Pictures Entertainment on Thursday, March 11, 2021 released the trailer for "The Unholy" you can watch here:
THE UNHOLY - Official Trailer (HD) | Now Playing in Theaters. 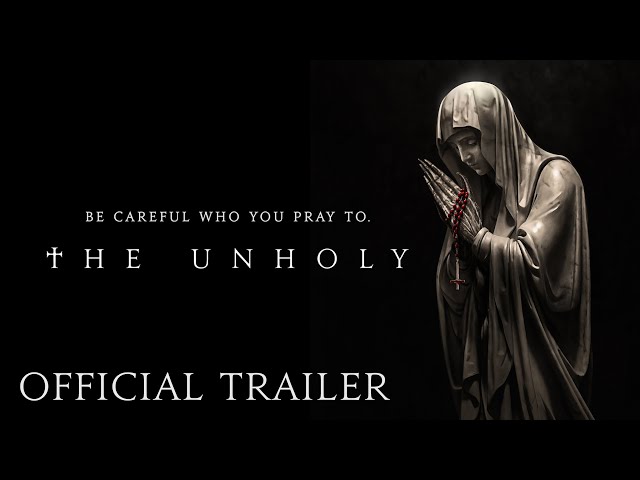 What is The Unholy movie plot?

Here is a short review of "The Unholy" movie plot summary.

The film opens with the execution of a woman accused of witchcraft in 1845 in Banfield, Massachusetts. Before she dies, however, her spirit is bound to the body of a doll.
Many years later, skeptical journalist Gerry Fenn (Jeffrey Dean Morgan) works a job reporting on the strange and unusual. His latest assignment takes him to Boston, where the purported strange activity is revealed to be a teenage prank. As he's preparing to leave he discovers the doll shown earlier in the movie and purposely crushes it, accidentally setting the woman's spirit free. Gerry later gets into an accident as he's driving away after seeing a young girl, Alice (Cricket Brown), run across the road. He follows her to a tree, the site where he found the doll, and hears her speak before collapsing. When he takes her to a hospital later he learns that Alice is a deaf-mute and couldn't have spoken. Glenn decides to stay in town to investigate what he thinks could be a real story rather than a hoax or prank.
The following day Alice stuns the community by speaking and proclaiming that she has been cured by the Virgin Mary. This launches a media furor that is further propelled by other seemingly miraculous healings. The Catholic Church sends Monsignor Delgarde (Diogo Morgado) to investigate the claims, assisted by Bishop Gyles (Cary Elwes). Gerry befriends Alice, during which time he learns that while she has been speaking to a being named Mary, the girl has only assumed that this is the religious figure. Beginning to suspect that something sinister is occurring due to visions of "Mary" as a horrific entity, Gerry finds a partner in Father Hagan (William Sadler), who was healed by Alice but also suspects the healings' true nature. Father Hagan discovers papers detailing the death of Mary Elnor (Marina Mazepa), the woman from the prologue. Mary sold her soul to Satan in order to seek revenge for her death. He would allow her and her descendants, revealed to be Alice, to perform "miracles" so people would pledge themselves to her and in turn, Satan. To the horror of Gerry and Father Hagan, they learn that Alice, who they believe is unaware of Mary's true nature, wishes to hold a service by the tree and broadcast it to the masses. An attempt by Father Hagan to stop this from happening is unsuccessful and results only in his death.

Who plays who in the The Unholy movie cast?

Here is the full cast and characters of "The Unholy" movie. Actors and actresses are sorted mostly in credits order.

When is The Unholy movie release date?

What are The Unholy filming details?

"The Unholy" movie is rated "PG-13", according to the MPAA film rating system.

What are critics and audiences saying about The Unholy movie?

"The Unholy" movie got average rating from critics. IMDB rating is 5.2/10. Rotten Tomatoes rating is 28/100. Audiences polled by CinemaScore gave the film an average grade of "C+" on a scale ranging from A+ to F.

More information and reviews on "The Unholy" movie you can get on the following websites.

The Unholy on IMDB is available at:

The Unholy on Wikipedia is available at: