Here are "Weathering with You" movie trailer, plot summary, full cast and characters, release date, streaming services and everything we know so far.

Is there a trailer for Weathering with You movie?

GKIDS Films on Monday, January 06, 2020 released the trailer for "Weathering with You" you can watch here:
Weathering With You - January 15. 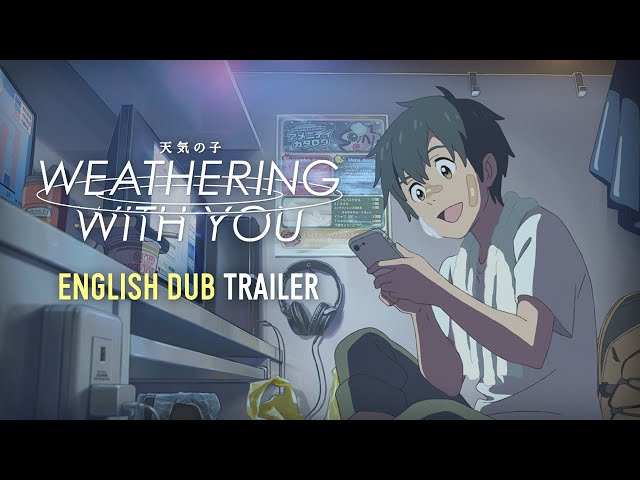 What is Weathering with You movie plot?

Here is a short review of "Weathering with You" movie plot summary.

In June 2021, first year high schooler Hodaka Morishima escapes Kōzu-shima in order to get away from his troubled home life to Tokyo. When his ferry to the city is hit by a rainstorm, he is saved by Keisuke Suga, who gives Hodaka his business card. As Hodaka becomes broke and struggles to find work, he meets Hina Amano, an employee of a McDonald's restaurant. She takes pity on him and gives him food. Later on, Hodaka finds an abandoned Makarov PM handgun in a waste bin he fell onto. After arriving at Suga's business location, he meets him there and his niece, Natsumi (Tsubasa Honda). Suga hires him as his assistant at a small occult magazine publishing company, where they investigate urban legends related to the unusually rainy weather in Tokyo. From a psychic, they hear the legend of a "sunshine girl" who can control the weather.
Hodaka sees Hina being intimidated into working at a back-alley club. After a brief chase, he scares off the club owners by firing his gun into the air, thinking it was a toy. He and Hina escape; she takes him to Yoyogi Kaikan, an abandoned building with a shrine on the roof, where he throws the gun away. Hina astonishes Hodaka by demonstrating her ability to clear the sky by praying. Hodaka finds out that Hina lives alone with her brother Nagi, and they have no adult guardian. Seeing how they are in a financial trouble, Hodaka proposes to start a business with Hina with the ability of sunshine girl: a job to clear the weather for events such as weddings and parties. They create a website to accept orders and their business quickly becomes a success. However, when clearing the sky for the Jingu Fireworks Festival, Hina is shown on television and their site gets flooded with requests, so they decide to close their business.

Who plays who in the Weathering with You movie cast?

Here is the full cast and characters of "Weathering with You" movie. Actors and actresses are sorted mostly in credits order.

When is Weathering with You movie release date?

What are Weathering with You filming details?

"Weathering with You" movie is rated "PG-13", according to the MPAA film rating system.

What are critics and audiences saying about Weathering with You movie?

"Weathering with You" movie got high rating from critics. IMDB rating is 7.5/10. Rotten Tomatoes rating is 91/100.

More information and reviews on "Weathering with You" movie you can get on the following websites.

Weathering with You on IMDB is available at:

Weathering with You on Wikipedia is available at: