Is there a trailer for Fresh movie? 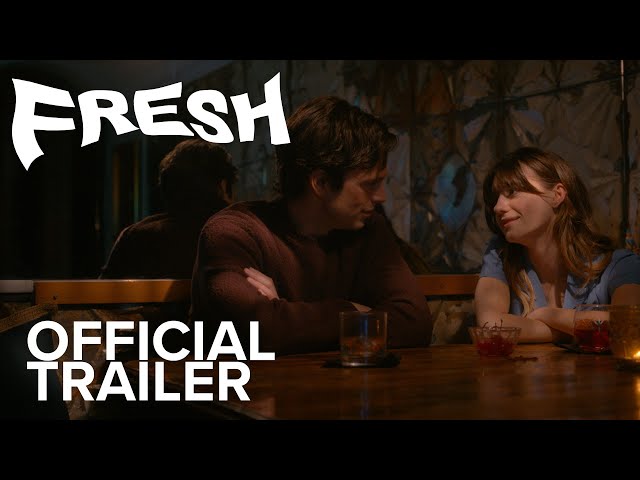 What is Fresh movie plot?

Here is a short review of "Fresh" movie plot summary.

Noa (Daisy Edgar-Jones), a woman from Portland, is increasingly disillusioned with online dating and the rude men she interacts with. One day at the supermarket, a man named Steve (Sebastian Stan) flirts with her and they exchange numbers. On their first date, the two quickly hit it off and have sex. After several dates, Steve invites Noa for a weekend break away alone with him. Against the advice of her best friend Mollie (Jojo T. Gibbs), Noa agrees to the trip. Planning to travel early the following day, Noa spends the evening at Steve's luxury home. Steve drugs Noa's cocktail and she falls unconscious.
Noa wakes up in captivity, chained to the ground. Steve explains that he is a butcher of human meat, which he sells to wealthy clients for consumption and eats himself. They prefer the meat of young women, so he regularly lures and abducts women on dates. He says that he will keep Noa alive as long as possible in order to keep her meat fresh as he surgically removes different pieces of her body. Steve allows Noa to take a shower, but she tries to escape. Steve captures her and harvests her buttocks as punishment. Noa speaks to a woman named Penny (Andrea Bang) who is being held captive in an adjacent room.
Meanwhile, Mollie becomes concerned about Noa's disappearance and begins investigating with her friend Paul (Dayo Okeniyi), a bartender who served Noa and Steve drinks on their first date. Searching online, Mollie discovers Steve is actually named Brendan, and is married to a woman named Ann (Charlotte Le Bon) with whom he has children. Believing he is having an affair, Mollie visits Ann and informs her of her suspicions. During their conversation, Brendan arrives, and when confronted by Mollie denies any knowledge of Noa. As she leaves, Mollie calls Noa's phone, which begins ringing in Brendan's pocket. Ann, revealed to be Brendan's accomplice, knocks Mollie unconscious. It is revealed that Ann has a prosthetic leg and was one of Brendan's victims before he fell for her.

Who plays who in the Fresh movie cast?

Here is the full cast and characters of "Fresh" movie. Actors and actresses are sorted mostly in credits order.

When is Fresh movie release date?

"Fresh" movie release date was scheduled to be on January 20, 2022 (Sundance) and on March 4, 2022 (United States) distributing by Searchlight Pictures, Disney+, Hulu and Star+.

What are Fresh filming details?

"Fresh" movie is rated "R", according to the MPAA film rating system.

What are critics and audiences saying about Fresh movie?

More information and reviews on "Fresh" movie you can get on the following websites.

Fresh on IMDB is available at:

Fresh on Wikipedia is available at: