Here are "We Can Be Heroes" movie trailer, plot summary, full cast and characters, release date and everything we know so far.

Is there a trailer for We Can Be Heroes movie?

Netflix on Friday, December 04, 2020 released the trailer for "We Can Be Heroes" you can watch here:
We Can Be Heroes starring Priyanka Chopra & Pedro Pascal | Official Trailer | Netflix. 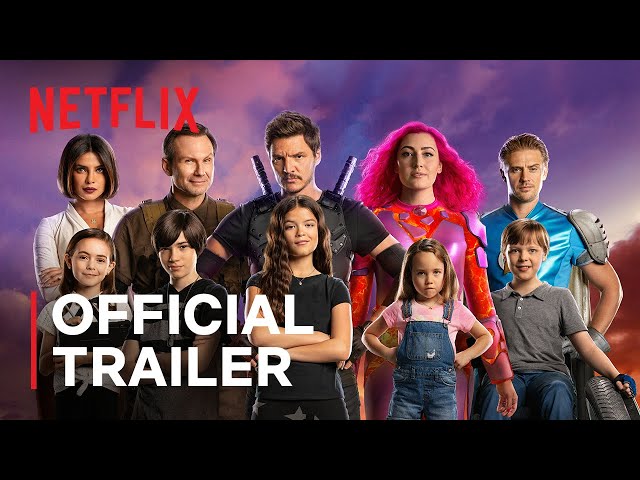 What is We Can Be Heroes movie plot?

Here is a short review of "We Can Be Heroes" movie plot summary.

Missy Moreno (YaYa Gosselin) is at home with her dad, Marcus Moreno (Pedro Pascal), when they receive word that aliens are invading. Missy is taken to Heroics Headquarters and placed in a vault with other children of the Heroics, a team of superheroes. Marcus, who retired from the Heroics, is reinstated as a member by Mrs. Granada, leader of the Program.
Missy meets the other children: Wheels (Andy Walken), who possesses super-intelligence; Noodles (Lyon Daniels), who can stretch his body; Ojo (Hala Finley), who is mute and only communicates through art; A-Capella (Lotus Blossom), who moves objects by singing; Slo-Mo (Dylan Henry Lau), who is always in slow motion; Face Maker, who can make any face; Rewind (Isaiah Russell-Bailey) and Fast Forward (Akira Akbar), twins that can alter time; Wild Card (Nathan Blair), who has immense power but no control over it; and Guppy (Vivien Lyra Blair), who has "shark strength" and can shape water into anything. The kids watch the battle between the aliens and Heroics on television, which ends with the Heroics being captured. Missy realizes that Ojo's drawings tell the future. When a drawing shows aliens breaking into the vault, the kids hatch a plan to escape.
Face Maker tricks the guards into coming into the vault where Guppy subdues them, but not before one of the guards triggers an emergency lockdown. Rewind sends them back in time, Wheels stops the guard from pushing the button, and Noodles steals their security badges. Mrs. Granada spots Missy in the hallway and seals the doors, but A-Capella makes a staircase to the roof, allowing them to escape. Noodles secures a vehicle, and the kids evade capture.
The kids land at the home of Missy's grandmother, who used to train the Heroics. She helps the kids master their powers and work as a team. The aliens arrive and Grandma (Adriana Barraza) sends the kids through a tunnel that leads to an empty field before she is captured. The kids spot an empty alien craft and use it to reach their Mother ship. They locate at a room with a purple pyramid, and see the president and Ms. Granada (Priyanka Chopra) speaking with each other. The two reveal that they are alien spies, sent to prepare Earth for a "takeover". The kids are placed in a cell. Guppy makes a replica of the cell key from the children's tears and opens the door. A fight between the kids and the aliens ensues and Wild Card is caught and taken for questioning, while the other kids make their way to the pyramid.

Who plays who in the We Can Be Heroes movie?

Here is the full cast and characters of "We Can Be Heroes" movie. Actors and actresses are sorted mostly in credits order.

When is We Can Be Heroes movie release date?

"We Can Be Heroes" movie release date was scheduled to be on December 25, 2020 (United States) distributing by Netflix.

What are We Can Be Heroes filming details?

"We Can Be Heroes" movie is rated "PG", according to the MPAA film rating system.

What are critics and audiences saying about We Can Be Heroes movie?

More information and reviews on "We Can Be Heroes" movie you can get on the following websites.

We Can Be Heroes on IMDB is available at:

We Can Be Heroes on Wikipedia is available at: