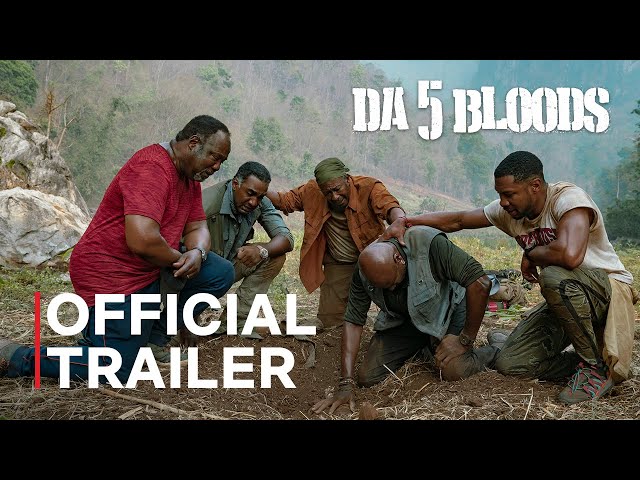 During the Vietnam War, a squad of Black US Army soldiers of the 1st Infantry Division, Paul (Delroy Lindo), Otis (Clarke Peters), Eddie (Norm Lewis), Melvin, and their squad leader Norman, who dub themselves the "Bloods," secure the site of a CIA airplane crash and recover its cargo, a locker of gold bars intended as payment for the Lahu people for their help in fighting the Viet Cong. The Bloods decide to take the gold for themselves and bury it so they can retrieve it later. However, in the ensuing Vietnamese counter-attack, Norman is killed, and the Bloods cannot locate the buried gold after a napalm strike obliterates the identifying landmarks.
In the present day, Paul, Otis, Eddie, and Melvin meet up in Ho Chi Minh City. A recent landslide had uncovered the tail of the crashed plane, and with this new information, they plan to find the gold and Norman's body. Otis reunites with his old Vietnamese girlfriend Tiên, who reveals that he is the father of her grown child. Tiên introduces the Bloods to Desroche (Jean Reno), a French businessman who agrees to help the Bloods smuggle the gold out of Vietnam once they retrieve it. Soon thereafter, they are joined by Paul's son David (Jonathan Majors), who has a tempestuous relationship with his father.
Vinh, a tour guide hired by the Bloods, leads the group out into the countryside, where a confrontation with a local merchant forces Paul to admit that he has post-traumatic stress disorder. At a hotel bar, David meets Hedy (Mélanie Thierry), the founder of LAMB, an organization dedicated to clearing landmines. The next day, Vinh drops off the group and tells them he will pick them up in a few days. During their first night, Paul confiscates a pistol Otis had been secretly given by Tiên and becomes suspicious of his motives. Eventually, the Bloods find the gold bars scattered across the side of a hill. They also find Norman's remains and pray over them. Eddie reveals that his excessive spending has rendered him broke but reminds the Bloods of Norman's original plan to give the gold to their black brethren in the United States.

Who plays who in the Da 5 Bloods movie cast?