Here are "mother!" movie trailer, plot summary, full cast and characters, release date and everything we know so far.

Is there a trailer for mother! movie? 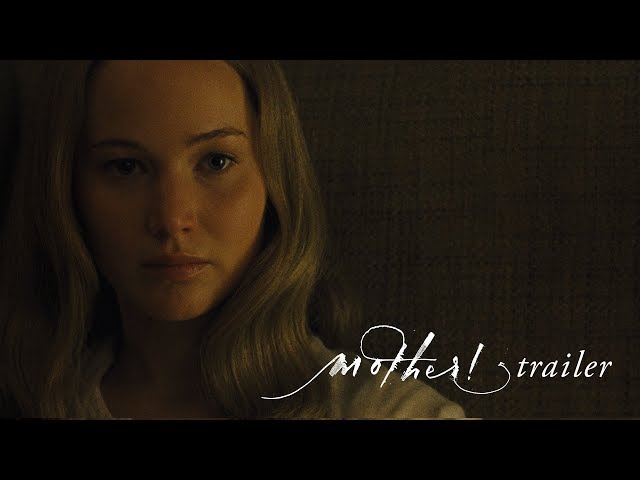 What is mother! movie plot?

Here is a short review of "mother!" movie plot summary.

In the burnt-out remains of a large house, Him (Javier Bardem), an acclaimed poet struggling with writer's block, places a crystal object on a pedestal in his study. The ruined house morphs into a lovely home in an edenic landscape. In bed, mother, the poet's wife and muse, awakens and wonders aloud where Him is. While renovating the house, she starts seeing things that unsettle her, including visualizing a beating heart within its walls. One day, a stranger referred to as Man (Ed Harris) turns up at the house, asking for a room and claiming to be a local doctor. Him readily agrees, and mother reluctantly follows suit. During his stay, Man suffers coughing fits and mother observes an open wound on his side. Soon Man's wife, Woman (Michelle Pfeiffer), also arrives to stay. Mother (Jennifer Lawrence) is increasingly frustrated with her guests, but Him begs her to let them stay, revealing that Man is a fan whose dying wish was to meet Him. However, when Man and Woman accidentally shatter the crystal object, which Him had forbidden them to touch, mother kicks them out and Him boards up his study. Before Man and Woman can leave, their two sons arrive and fight over their father's will. The oldest son, who will be left with nothing, severely wounds the younger brother and flees. Him, Man, and Woman take the injured son for help. Alone in the house, mother follows a trail of blood to find a tank of heating oil hidden behind the basement walls.
Upon returning, Him informs mother the son has died. Dozens of people arrive at the house to honor the dead son. They behave in rude and presumptuous ways that irritate mother; she snaps when they break a sink, partially flooding the house. She orders everyone out and berates Him for allowing so many people inside while ignoring her needs. Their argument ends in passionate lovemaking. The next morning, mother announces she is pregnant. The news elates Him and inspires Him to finish his work. Mother prepares for the arrival of their child and reads Him's beautiful new poem. Upon publication, it immediately sells out every copy. In celebration, mother prepares a big dinner, but a group of fans arrives at the house before they can eat. She asks Him to send them away, but he insists he has to be polite and show his appreciation, and tells her he will return soon. Mother tries to lock the doors, but more fans arrive and enter the house, where many begin to use the toilet. They start stealing things as souvenirs and damaging the house, but Him is oblivious due to the adulation he is receiving. Hundreds of people fill the house and an increasingly disoriented mother watches it devolve into chaos. Military forces battle a cult of frenzied fans who tear rooms apart and engage in religious rituals. Amidst gunfire and explosions, the herald, the poet's publicist, organizes mass executions. Mother goes into labor and finds Him. He takes her to his study, which he reopens so she can give birth there.

Who plays who in the mother! movie?

Here is the full cast and characters of "mother!" movie. Actors and actresses are sorted mostly in credits order.

When is mother! movie release date?

What are mother! filming details?

"mother!" movie is rated "R", according to the MPAA film rating system.

What are critics and audiences saying about mother! movie?

"mother!" movie got high rating from critics. IMDB rating is 6.6/10. Rotten Tomatoes rating is 68/100. Audiences polled by CinemaScore gave the film an average grade of "F" on a scale ranging from A+ to F.

More information and reviews on "mother!" movie you can get on the following websites.

mother! on IMDB is available at:

mother! on Wikipedia is available at: