Here are "Jumanji: The Next Level" movie trailer, plot summary, full cast and characters, release date and everything we know so far.

Is there a trailer for Jumanji: The Next Level movie?

Sony Pictures Entertainment on Thursday, October 31, 2019 released the trailer for "Jumanji: The Next Level" you can watch here:
JUMANJI: THE NEXT LEVEL - Final Trailer (HD). 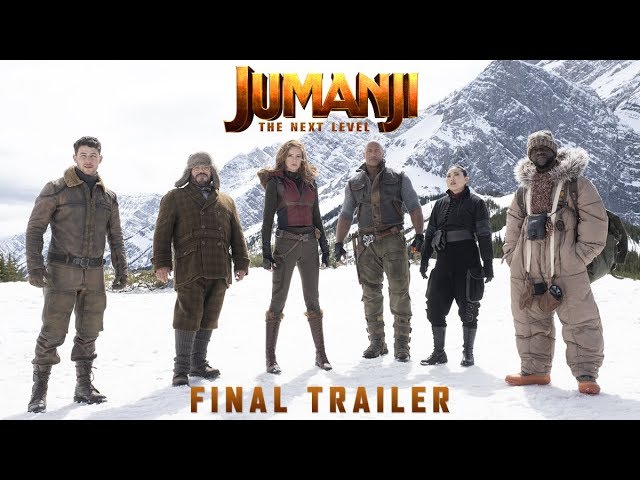 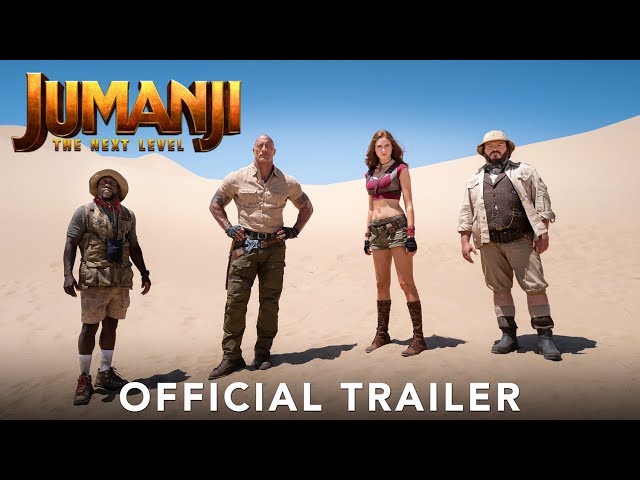 What is Jumanji: The Next Level movie plot?

Here is a short review of "Jumanji: The Next Level" movie plot summary.

Two years after their adventure in Jumanji: Welcome to the Jungle, Spencer Gilpin (Alex Wolff), Anthony "Fridge" Johnson (Ser'Darius Blain), Martha Kaply (Morgan Turner), and Bethany Walker (Madison Iseman) have separated for college, but plan a reunion over Christmas break. The night before the reunion, Spencer, feeling like he has no purpose, gets out the Jumanji game set. When he doesn't show up at the reunion, his friends visit his home, greeted by Spencer's grandfather Eddie (Danny DeVito) and Eddie's former friend and business partner Milo Walker (Danny Glover), who is visiting him. They discover that Spencer has gone into Jumanji and Fridge, Martha, Eddie and Milo go into the game as well, leaving Bethany behind.
Inside the game, Martha finds herself as Ruby Roundhouse (Karen Gillan), the same avatar she had in the prior movie. Fridge becomes Professor Sheldon Oberon (Jack Black) while Eddie and Milo become Dr. Smolder Bravestone (Dwayne Johnson) and Franklin "Mouse" Finbar (Kevin Hart). After instructing Eddie and Milo on the game's rules, the group encounters non-player character Nigel Billingsley (Rhys Darby), the game's guide, who reveals that Jumanji is suffering from a massive drought. To leave the game, the group must end the drought by recovering a magical necklace known as the Falcon Heart that was stolen by the warlord Jurgen the Brutal (Rory McCann). Bethany goes to fellow Jumanji player Alex Vreeke (Colin Hanks) for help.
Transported to a desert to pursue Jurgen, and after narrowly escaping a flock of pursuing ostriches, the group encounters Spencer, who is operating a new avatar, a skilled thief named Ming Fleetfoot (Awkwafina). Apologizing for their predicament, Spencer agrees to help the group. While attempting to escape the desert, the group faces new challenges and problems, along with collecting an in-game item called a Jumanji Berry, and discovering a pool of glowing green water that allows them to switch avatars. Meanwhile, Eddie bickers with Milo, revealing their friendship ended when Milo sold a diner they owned behind Eddie's back, forcing him into retirement. Traveling to a forest beyond the desert, the group crosses a series of rope bridges, while being attacked by a group of mandrills. After succeeding in crossing the bridges, they are reunited with Alex, as his avatar Jefferson "Seaplane" McDonough (Nick Jonas), and Bethany, who is operating another new avatar called Cyclone - a black horse that can only be understood by Finbar. As they rest from their battle with the mandrills, Eddie realizes that Milo is terminally ill and wanted to make amends before he died, where the two overcome their differences and reconcile with each other.

Who plays who in the Jumanji: The Next Level movie?

Here is the full cast and characters of "Jumanji: The Next Level" movie. Actors and actresses are sorted mostly in credits order.

When is Jumanji: The Next Level movie release date?

What are Jumanji: The Next Level filming details?

"Jumanji: The Next Level" movie is rated "PG-13", according to the MPAA film rating system.

What are critics and audiences saying about Jumanji: The Next Level movie?

"Jumanji: The Next Level" movie got high rating from critics. IMDB rating is 6.7/10. Rotten Tomatoes rating is 72/100. Audiences polled by CinemaScore gave the film an average grade of "A-" on a scale ranging from A+ to F.

More information and reviews on "Jumanji: The Next Level" movie you can get on the following websites.

Jumanji: The Next Level on IMDB is available at:

Jumanji: The Next Level on Wikipedia is available at: