Is there a trailer for Emma. movie?

Focus Features on Thursday, November 21, 2019 released the trailer for "Emma." you can watch here:
EMMA. - Official Trailer - Now On Demand and In Theaters. 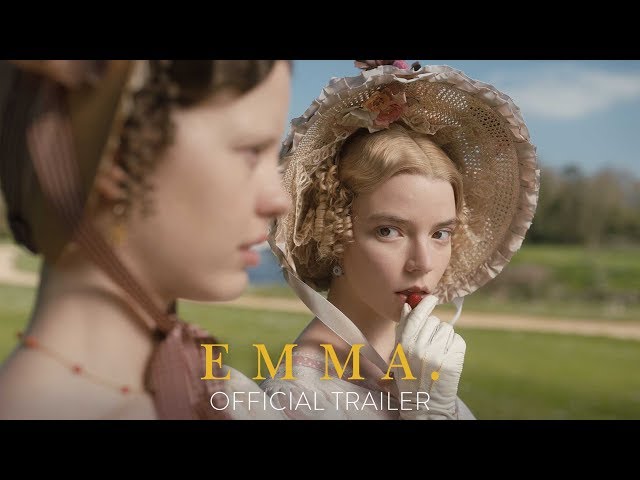 What is Emma. movie plot?

Here is a short review of "Emma." movie plot summary.

In Regency-era England, wealthy and beautiful Emma Woodhouse (Anya Taylor-Joy) searches for a new companion after her governess, Miss Taylor, marries and becomes Mrs. Weston. Emma settles on Harriet Smith (Mia Goth), a younger girl whom Emma supposes is the unclaimed child of a gentleman; Harriet's parents are unknown, but her education has been provided for. Emma learns that Mr. Robert Martin (Connor Swindells), a tenant farmer of the brother of Emma's brother-in-law, Mr. Knightley (Johnny Flynn), has proposed to Harriet. Though claiming she will not interfere, Emma manipulates Harriet into declining Mr. Martin's offer of marriage, much to Harriet's distress. Emma believes that Mr. Elton, the local vicar, is in love with Harriet and encourages Harriet to transfer her hopes to him, despite Mr. Knightley's warning that she should not involve herself in the situation.
At Christmas time, Emma's older sister and Mr. Knightley's younger brother come to visit. After everyone leaves dinner with the Westons early, Emma finds herself alone in a carriage with Mr. Elton, who declares his love for her. Emma promptly refuses him, and Mr. Elton disappears for six weeks, eventually returning with a wife. Two much-talked-about members of Emma's social circle appear: Jane Fairfax (Amber Anderson), the governess niece of Miss Bates (Miranda Hart), and Frank Churchill, Mr. Weston's son from his first marriage. Emma grows jealous of Jane but is entranced by Frank.
Frank's arrival prompts the Westons to hold a ball, where Mr. Elton embarrasses Harriet by pointedly refusing to dance with her. She is rescued by Mr. Knightley, who asks her to dance. Emma and Mr. Knightley also dance together, awakening romantic feelings between them. Though Emma leaves before Mr. Knightley can speak to her, he runs to her home only for their meeting to be interrupted by Frank, who has rescued Harriet after being set upon by Romanichal Travellers. Harriet intimates to Emma that she has fallen in love again, leading Emma to believe Harriet is in love with Frank. Emma again vows not to interfere but manipulates circumstances so that Harriet and Frank may spend more time together.

Who plays who in the Emma. movie cast?

Here is the full cast and characters of "Emma." movie. Actors and actresses are sorted mostly in credits order.

When is Emma. movie release date?

What are Emma. filming details?

The duration of the film is 124 minutes. With a budget of $10 million, the film grossed over $26 million.

"Emma." movie is rated "PG", according to the MPAA film rating system.

What are critics and audiences saying about Emma. movie?

"Emma." movie got high rating from critics. IMDB rating is 6.7/10. Rotten Tomatoes rating is 87/100. Audiences polled by CinemaScore gave the film an average grade of "B" on a scale ranging from A+ to F.

More information and reviews on "Emma." movie you can get on the following websites.

Emma. on IMDB is available at:

Emma. on Wikipedia is available at: