Here are "The Hate U Give" movie trailer, plot summary, full cast and characters, release date, streaming services and everything we know so far.

Is there a trailer for The Hate U Give movie? 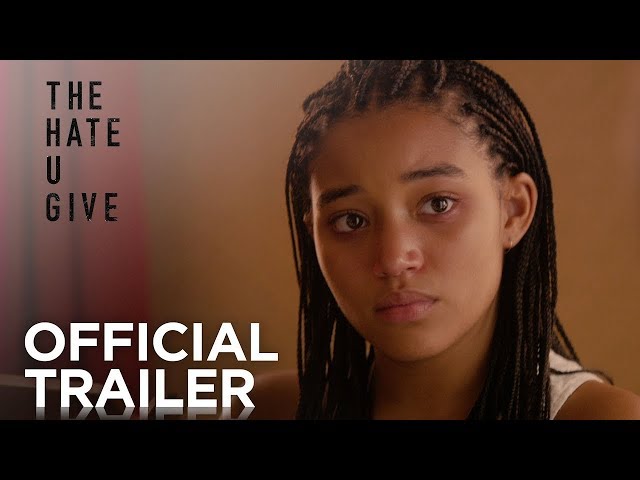 What is The Hate U Give movie plot?

Here is a short review of "The Hate U Give" movie plot summary.

Starr Carter (Amandla Stenberg) is a 16-year-old African-American girl who lives in the predominantly black neighborhood of Garden Heights, but attends a predominantly white private school Williamson Prep.
After a gun goes off at a party Starr is attending, Starr is driven home by her childhood best friend, Khalil. While driving home, they are stopped by a police officer for failing to signal a lane change. The officer barks orders at Khalil, such as to roll down the window and turn off the music. Khalil disagrees with the officer, who instructs him to exit the car.
While outside the car, the officer retrieves Khalil's drivers license and instructs him to keep his hands on the roof while the officer checks his ID. Khalil leans down into the car window to check on Starr, before reaching through the driver-side to pick up a hairbrush. The officer, thinking that Khalil is fixing to brandish a gun, shoots and kills Khalil. As Starr mourns over Khalil, the officer realizes that he was holding a hairbrush, not a gun.
Khalil's killing becomes a national news story. Starr's identity as the witness is initially kept secret from everyone outside Starr's familyleaving Starr's two best friends, Hailey Grant (Sabrina Carpenter) and Maya Yang (Megan Lawless), and Starr's boyfriend, Chris, who all attend Williamson Prep together, unaware of Starr's connection to the killing. Having to keep this secret weighs on Starr, as does her need to keep her Williamson and Garden Heights personas separate.
Starr agrees to be interviewed on television and to testify in front of a grand jury after being encouraged by a civil rights lawyer, April Ofrah (Issa Rae). While defending Khalil's character during her interview, in which her identity is hidden, she names the King Lords (Anthony Mackie), the gang that controls her neighborhood. The gang retaliates by threatening Starr and her family, forcing them to move in with her Uncle Carlos (Common), her mom's brother, who is a police detective.

Who plays who in the The Hate U Give movie cast?

Here is the full cast and characters of "The Hate U Give" movie. Actors and actresses are sorted mostly in credits order.

When is The Hate U Give movie release date?

What are The Hate U Give filming details?

"The Hate U Give" movie is rated "PG-13", according to the MPAA film rating system.

What are critics and audiences saying about The Hate U Give movie?

"The Hate U Give" movie got high rating from critics. IMDB rating is 7.5/10. Rotten Tomatoes rating is 97/100. The audience also loves the film. Audiences polled by CinemaScore gave the film an average grade of "A+" on a scale ranging from A+ to F.

More information and reviews on "The Hate U Give" movie you can get on the following websites.

"The Hate U Give" movie official website with trailer, full cast, crew and plot summary review:

The Hate U Give on IMDB is available at:

The Hate U Give on Wikipedia is available at: