Here are "Ready or Not" movie trailer, plot summary, full cast and characters, release date, streaming services and everything we know so far.

Is there a trailer for Ready or Not movie?

SearchlightPictures on Monday, June 17, 2019 released the trailer for "Ready or Not" you can watch here:
READY OR NOT | Red Band Trailer | FOX Searchlight. 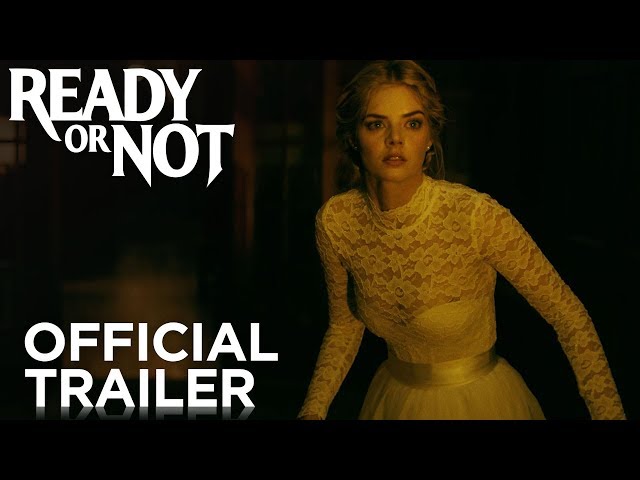 What is Ready or Not movie plot?

Here is a short review of "Ready or Not" movie plot summary.

As a child, Daniel Le Domas (Samara Weaving) is confronted in his family's mansion by a wounded man named Charles (Andrew Anthony), who begs him for help. Instead, Daniel alerts his family, who arrive wearing ceremonial masks and robes. Despite the pleas of his bride, Charles is shot with a speargun and dragged away.
Thirty years later, Daniel's brother Alex, who runs the successful Le Domas Family Games company, is set to marry Grace, a former foster child. On her wedding day, Grace meets the Le Domases: Daniel and his snobbish wife Charity; Alex's cocaine-addicted sister Emilie, her husband Fitch, and their young sons Georgie (Liam MacDonald) and Gabe; Alex's aunt Helene, and his parents Tony (Henry Czerny) and Becky.
After the ceremony, Tony explains his ancestor made a deal with a man named "Le Bail" to build the Le Domas fortune in exchange for the family observing a tradition: every new member draws a game card from Le Bail's puzzle box. Grace draws "Hide-and-Seek", and as she hides, the Le Domases arm themselves. Unwilling to participate, Alex escapes into the mansion's secret passages and finds Grace, who witnesses Emilie kill a maid she mistakes for Grace. Alex reveals the curse: every new member must play a game determined by the box, or the family will die at dawn; hide-and-seek requires the family kill the newcomer. It was last played by Helene's husband, Charles.
With the mansion locked down, Alex disables the security system to allow Grace to escape. She is discovered by Daniel, who is disillusioned with the family and gives her a head start before alerting the others, leading Emile to accidentally kill another maid. Grace's escape is blocked by the family butler, Stevens (John Ralston). Alex destroys the security system and is restrained by Daniel and Tony. Grace is discovered by another maid, but the maid accidentally crushes herself in a dumbwaiter.

Who plays who in the Ready or Not movie?

Here is the full cast and characters of "Ready or Not" movie. Actors and actresses are sorted mostly in credits order.

When is Ready or Not movie release date?

What are Ready or Not filming details?

The duration of the film is 95 minutes. With a budget of $6 million, the film grossed over $57.6 million.

"Ready or Not" movie is rated "R", according to the MPAA film rating system.

What are critics and audiences saying about Ready or Not movie?

"Ready or Not" movie got high rating from critics. IMDB rating is 6.8/10. Rotten Tomatoes rating is 88/100. Audiences polled by CinemaScore gave the film an average grade of "B+" on a scale ranging from A+ to F.

More information and reviews on "Ready or Not" movie you can get on the following websites.

Ready or Not on IMDB is available at:

Ready or Not on Wikipedia is available at: