Is there a trailer for Underwater movie? 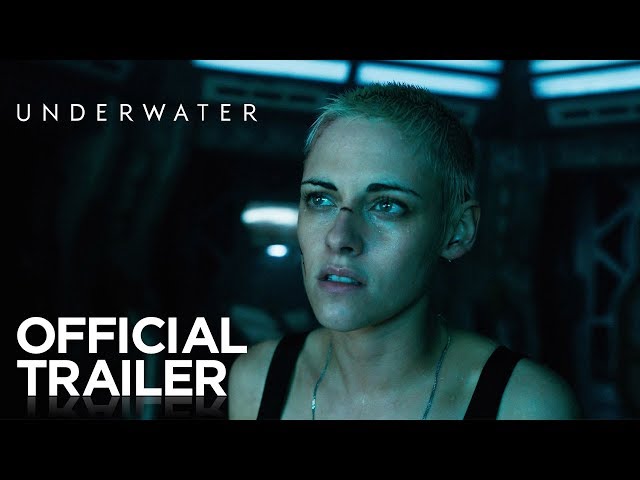 What is Underwater movie plot?

Here is a short review of "Underwater" movie plot summary.

Kepler 822, a research and drilling facility operated by Tian Industries at the bottom of the Mariana Trench, is struck by a strong earthquake. As part of the facility is destroyed by the quake, mechanical engineer Norah Price (Kristen Stewart) and her colleagues, Rodrigo (Mamoudou Athie) and Paul (T.J. Miller), make their way to the escape pod bay. However, the three discover that all of the escape pods have already been deployed, with Captain Lucien being the only person in the area when the three arrive. Together they reach a control base and find biologist Emily Haversham (Jessica Henwick) and engineer Liam Smith (John Gallagher Jr.), who are unsuccessful in their attempts to make contact with the surface. Lucien suggests using pressurized suits to walk one mile across the ocean floor to Roebuck 641 in the hope of resurfacing from there. As they descend in a freight elevator, Rodrigo's defective helmet implodes under the water pressure. The surviving crew see a distress beacon from one of the escape pods below, and Smith and Paul go to investigate. As they arrive at the location, they find a body in the rubble. A creature emerges from the corpse's back and attacks. Smith kills the creature and takes it inside. Haversham examines the creature and realizes that it belongs to a previously undiscovered species.
The five make their way to the sea floor, but as they are walking, Kepler explodes above and nearly buries them in debris. Smith is hit, but Price and Lucien save him. They manage to get through an access tunnel to an intermediate station, where they can charge and clean their suits. However, they find that Smith's oxygen scrubber is badly damaged from the debris. On their way through the access tunnel, Paul is attacked by an unknown creature, dragged underwater and killed. Before the team leaves the access tunnel, they find that Smith's damaged oxygen pod will cause him to suffocate from the explosion's toxic fumes. Unwilling to leave another crew member behind, Price, Lucien and Haversham agree to help Smith walk. The four set off across the ocean floor, but a humanoid creature appears and drags Smith into a cave. Lucien manages to get Smith out, but is himself pulled from the other three. Price is dragged along with Lucien, but Lucien sacrifices himself to spare Price from the increasing pressure differential.

Who plays who in the Underwater movie?

Here is the full cast and characters of "Underwater" movie. Actors and actresses are sorted mostly in credits order.

Kristen Stewart  as Norah Price a mechanical engineer on the Kepler
Vincent Cassel  as W. Lucien the Captain of the Kepler
Mamoudou Athie  as Rodrigo Nagenda a drill worker
John Gallagher Jr.  as Liam Smith an engineer on the Kepler and Emily's boyfriend
T.J. Miller  as Paul Abel a drill worker who's friends with Price
Jessica Henwick  as Emily Haversham a biological research assistant on the Kepler and Liam's girlfriend
Gunner Wright  as Lee Miller a crew member
Fiona Rene  as Godmother
Amanda Troop  as Poseidon Patty

When is Underwater movie release date?

What are Underwater filming details?

"Underwater" movie is rated "PG-13", according to the MPAA film rating system.

What are critics and audiences saying about Underwater movie?

"Underwater" movie got average rating from critics. IMDB rating is 5.8/10. Rotten Tomatoes rating is 47/100. Audiences polled by CinemaScore gave the film an average grade of "C" on a scale ranging from A+ to F.

More information and reviews on "Underwater" movie you can get on the following websites.

Underwater on IMDB is available at:

Underwater on Wikipedia is available at: