Is there a trailer for Come Play movie? 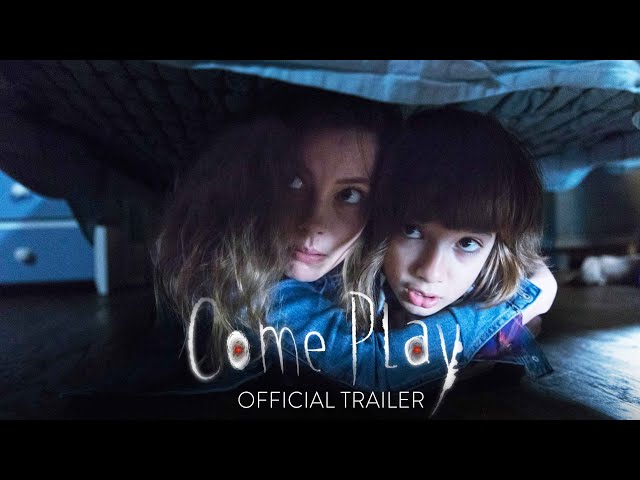 What is Come Play movie plot?

Oliver (Azhy Robertson) is a young non-verbal autistic boy who uses a smartphone to communicate with people. He attends school and is mostly taken care of by his mother, Sarah; his father Marty (John Gallagher Jr.) spends most of his time at work trying to make ends meet. Sarah (Gillian Jacobs) and Marty's marriage has become difficult to the extent that Marty moves out. One night Oliver sees an app on his smartphone, "Misunderstood Monsters", narrating the story of a monster named "Larry" who "just wants a friend". Strange things begin happening to Oliver after he reads the story: lights go out by themselves, and a second face appears on his tablet while he plays with a picture app. At school, Oliver is bullied by his classmates due to his condition. They lure him into a field and chuck his phone away.
One night, Sarah organizes a sleepover so Oliver can become more social. The three boys who bullied him come over. Oliver hides the tablet as he is terrified of it. One of the boys retrieves the tablet and reads the story. The lights go out and Larry appears, but he can only be seen through the camera of the tablet. Larry attacks Byron (Winslow Fegley), one of the boys, and the terrified boys all blame Oliver for the incident. In the following days, Sarah begins to see the same strange things Oliver did. Confronting Larry through Oliver's tablet, she learns that Larry wishes to "take" Oliver back to his home world.
That night, Marty takes Oliver to his night-shift parking lot attendant job. Larry, revealing as a skeletal creature similar to a ghoul, begins to stalk them. When Marty witnesses Larry picking Oliver off from the ground, he finally believes Sarah and Oliver. They break the tablet and assume everything is over. Byron is traumatized from the incident at Oliver's house but comes clean on what really happened, absolving Oliver of blame. It is revealed that Byron and Oliver were once friends but their friendship ended because Oliver accidentally hurt Byron which also caused their moms to break up their friendship. They both reconcile.

Who plays who in the Come Play movie?

Here is the full cast and characters of "Come Play" movie. Actors and actresses are sorted mostly in credits order.

What are Come Play filming details?

The duration of the film is 96 minutes. With a budget of $9 million, the film grossed over $13.2 million.

"Come Play" movie is rated "PG-13", according to the MPAA film rating system.

What are critics and audiences saying about Come Play movie?

"Come Play" movie got average rating from critics. IMDB rating is 5.7/10. Rotten Tomatoes rating is 57/100. Audiences polled by CinemaScore gave the film an average grade of "B-" on a scale ranging from A+ to F.

More information and reviews on "Come Play" movie you can get on the following websites.

Come Play on IMDB is available at:

Come Play on Wikipedia is available at: