Here are "Half Brothers" movie trailer, plot summary, full cast and characters, release date and everything we know so far.

Is there a trailer for Half Brothers movie?

Focus Features on Thursday, October 08, 2020 released the trailer for "Half Brothers" you can watch here:
HALF BROTHERS - Official Trailer - In Theaters December 4. 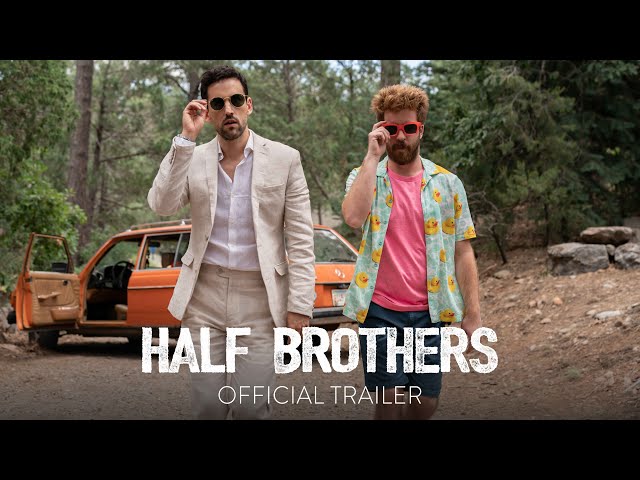 What is Half Brothers movie plot?

Here is a short review of "Half Brothers" movie plot summary.

In 1994, Mexico, Young Renato (Luis Gerardo Méndez) Murguia's father Flavio (Juan Pablo Espinosa) has to immigrate to the US in search of economic opportunity. Although Flavio promises to return soon, he does not. Twenty-five years later, Renato is a successful executive of an aviation company in Mexico, and is engaged to Pamela (Pia Watson) who already has a son Emilio (Mike A. Salazar). Renato is contacted by a woman named Katherine (Ashley Poole), who says she is Flavio's wife. She tells him that Flavio is very ill and wishes for Renato to see him in Chicago. Renato is still angry at his father for never returning all those years, but reluctantly ends up going to Chicago.
At a coffee shop, a goofy man named Asher (Connor Del Rio) is trying to make a social media video and attempting to get a free coffee. When he doesn't have money, he asks Renato to spot him. Renato refuses, and when Asher presses him, Renato steps up to order his coffee and pay for all the doughnuts on the counter.
Renato meets Flavio at the hospital for the first time in decades. Asher enters the room and turns out, he is Flavio's son too. Flavio reveals to the two men that they are brothers. Both of them are displeased but Flavio asks them to do one last favor for him, to look for Eloise, after delivering an envelope to a man named Evaristo (José Zúñiga).
Flavio dies the next day. Renato attends the funeral. Asher tries to convince him to fulfill their father's dying wish, but Renato still doesn't want to. He leaves the funeral but eventually relents and turns around to tell Asher to pick him up the next day from his hotel so they can head out.

Who plays who in the Half Brothers movie?

Here is the full cast and characters of "Half Brothers" movie. Actors and actresses are sorted mostly in credits order.

When is Half Brothers movie release date?

"Half Brothers" movie release date was scheduled to be on December 4, 2020 (United States) distributing by Focus Features.

What are Half Brothers filming details?

The duration of the film is 96 minutes. The film grossed over $2.2 million.

"Half Brothers" movie is rated "PG-13", according to the MPAA film rating system.

What are critics and audiences saying about Half Brothers movie?

"Half Brothers" movie got average rating from critics. IMDB rating is 5.8/10. Rotten Tomatoes rating is 34/100. Audiences polled by CinemaScore gave the film an average grade of "B" on a scale ranging from A+ to F.

More information and reviews on "Half Brothers" movie you can get on the following websites.

Half Brothers on IMDB is available at:

Half Brothers on Wikipedia is available at: