Is there a trailer for Mortal Kombat Legends: Scorpion's Revenge movie? 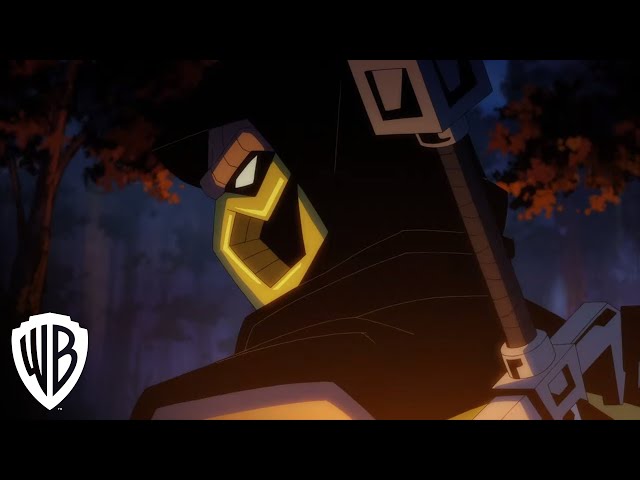 In Japan, Shirai Ryu grandmaster Hanzo Hasashi (Patrick Seitz) and his young son Satoshi are ambushed on their way home by several ninjas from the rival Lin Kuei clan. Hasashi kills them all after discovering that the Lin Kuei have slaughtered the rest of the Shirai Ryu, including his wife Harumi. The Lin Kuei's Grandmaster Sub-Zero (Steve Blum) appears, uses his freezing abilities to restrain Hanzo in ice and then murders Satoshi. He then impales Hanzo through the neck with an icicle, killing him. Deep below in the depths of the Netherrealm, Hasashi is mysteriously resurrected and meets with the sorcerer Quan Chi (Darin De Paul), who persuades Hanzo to fight for him in the Mortal Kombat tournament so that he can exact his revenge on Sub-Zero. Hanzo agrees, dubbing himself Scorpion.
Meanwhile, the thunder god Raiden (Dave B. Mitchell) and the Shaolin monk Liu Kang (Jordan Rodrigues) make preparations to defend Earthrealm by participating in the Mortal Kombat tournament, hosted by the aging warlock Shang Tsung (Artt Butler). The tournament's victor will battle Tsung to decide the fate of Earthrealm. The pair are accompanied by out-of-work Hollywood actor Johnny Cage (Joel McHale) and Special Forces agent Sonya Blade (Jennifer Carpenter), with both having their own reasons for participating: Sonya is in pursuit of Black Dragon crime syndicate leader Kano (Robin Atkin Downes), and Johnny believes that he is participating in a film project.
Upon arrival on Shang Tsung's island, Scorpion attempts to steal Shinnok's amulet on Quan Chi's orders, but Raiden persuades him not to follow through on the deal. Meanwhile, Cage, Liu, and Sonya witness Sonya's partner Jackson "Jax" Briggs (Ike Amadi) being grievously injured by the tournament's champion Goro (Kevin Michael Richardson) until Raiden intervenes. During the course of the tournament, Johnny barely claims victory over Baraka, Sonya successfully kills Reptile, and Liu fights Kitana, emerging as the winner when she yields. In an attempt to stop the Earthrealm heroes, Kano has his assassins infiltrate the island to kill them, but they are all killed by Scorpion. While attempting to fight Kano, Sub-Zero appears and helps deal with the assassins, but a vengeful Scorpion tackles him off a bridge into a spike pit, impaling them both and killing Sub-Zero. Johnny and Sonya pursue Kano in order to rescue Jax while Liu rushes to Shang Tsung's throne room.

Who plays who in the Mortal Kombat Legends: Scorpion's Revenge movie?

Here is the full cast and characters of "Mortal Kombat Legends: Scorpion's Revenge" movie. Actors and actresses are sorted mostly in credits order.

What are critics and audiences saying about Mortal Kombat Legends: Scorpion's Revenge movie?

More information and reviews on "Mortal Kombat Legends: Scorpion's Revenge" movie you can get on the following websites.

Mortal Kombat Legends: Scorpion's Revenge on IMDB is available at:

Mortal Kombat Legends: Scorpion's Revenge on Wikipedia is available at: