Here are "The Woman King" movie trailer, plot summary, full cast and characters, release date, streaming services and everything we know so far.

Is there a trailer for The Woman King movie?

Sony Pictures Entertainment on Wednesday, July 06, 2022 released the trailer for "The Woman King" you can watch here:
THE WOMAN KING - Official Trailer (HD). 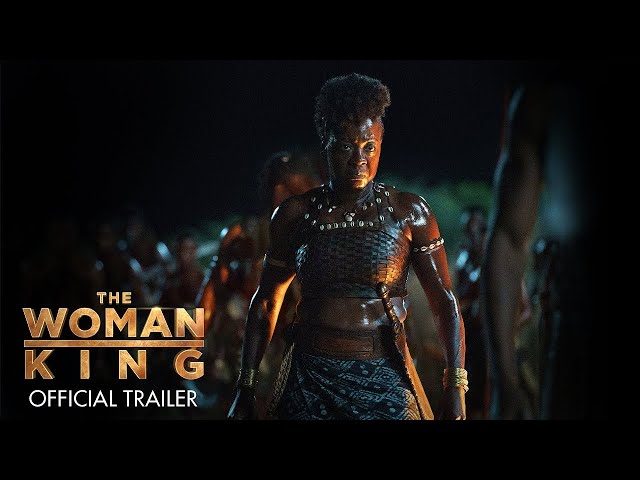 What is The Woman King movie plot?

Here is a short review of "The Woman King" movie plot summary.

In the West African kingdom of Dahomey during the 1820s, General Nanisca (Viola Davis), leader of the all-female group of warriors, the Agojie, liberates Dahomean women who were abducted by slavers from the Oyo Empire. This provokes King Ghezo (John Boyega) of Dahomey to prepare for an all-out war with the Oyo. Nanisca begins to train a new generation of warriors to join the Agojie in order to protect the kingdom. Among these warriors is Nawi (Thuso Mbedu), a strong-willed girl who was offered by her father to the king after refusing to marry men who would beat her. Nawi befriends Izogie (Lashana Lynch), a veteran Agojie. She also reveals that she is adopted to Nanisca and shows a birthmark on her left shoulder, shocking Nanisca. European slavers led by Santo Ferreira (Hero Fiennes Tiffin) and accompanied by the half-Dahomean Malik (Jordan Bolger) arrive in Africa as part of an alliance with the Oyo, led by General Oba Ade (Jimmy Odukoya). Nawi encounters Malik while the latter is bathing, and the two become friends. Shortly after graduating from training to become a full-fledged Agojie, Nawi sneaks off to speak with Malik and learns that the Oyo are planning to attack. She reports this to Nanisca, who admonishes her for her recklessness. Nanisca reveals that in her youth, she was captured by Oba, raped, and impregnated. After giving birth to a daughter, Nanisca embedded a shark tooth in her left shoulder before giving her away. Nanisca extracts the tooth from Nawi, confirming that she is her biological daughter.
Nanisca leads the Agojie in an attack on the Oyo. The attack is successful, but Oba escapes and Nawi and Izogie are captured. One of the captured Agojie slips away and reports the others' fate to Nanisca. Ghezo prepares to bestow the title of Woman King, his partner and equal in ruling Dahomey, upon Nanisca, but refuses to authorize a rescue mission for the captive Agojie. Meanwhile, Izogie is killed in an escape attempt and Malik buys Nawi in order to protect her. Nanisca defies orders and sets out with a group of like-minded warriors to rescue the captives. The chaos allows Nawi to escape and rejoin Nanisca. Malik frees several other slaves who drown Santa, and Nanisca kills Oba in single combat. The triumphant Agojie return to Dahomey, where Ghezo privately and briefly admonishes Nanisca for disobeying him before crowning her the Woman King. After the festivities, Nanisca and Nawi privately acknowledge their familial relationship.

Who plays who in the The Woman King movie cast?

Here is the full cast and characters of "The Woman King" movie. Actors and actresses are sorted mostly in credits order.

When is The Woman King movie release date?

What are The Woman King filming details?

The duration of the film is 135 minutes. With a budget of $50 million, the film grossed over $19 million.

What are critics and audiences saying about The Woman King movie?

"The Woman King" movie got average rating from critics. IMDB rating is 5.9/10. Audiences polled by CinemaScore gave the film an average grade of "A+" on a scale ranging from A+ to F.

More information and reviews on "The Woman King" movie you can get on the following websites.

The Woman King on IMDB is available at:

The Woman King on Wikipedia is available at: