Is there a trailer for Palm Springs movie? 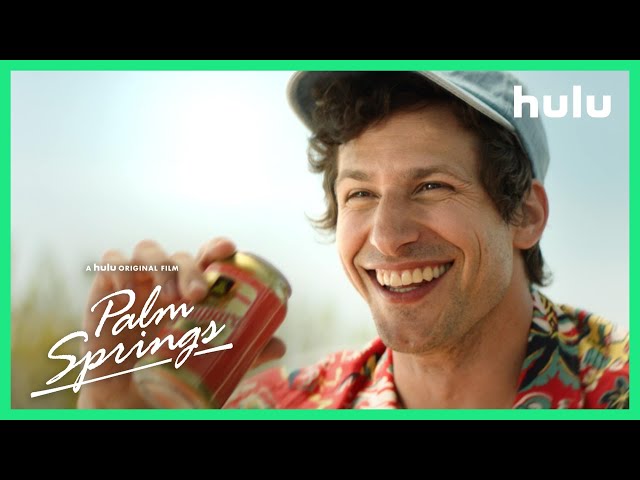 What is Palm Springs movie plot?

On November 9 in Palm Springs, Nyles (Andy Samberg) and his girlfriend Misty (Meredith Hagner) attend the wedding of Tala (Camila Mendes) and Abe (Tyler Hoechlin). At the reception, Nyles bonds with the maid of honor, Sarah (Cristin Milioti). After he shows her Misty cheating on him, Sarah and Nyles go to the desert to have sex. As he undresses, Nyles is shot with an arrow fired by an assailant. Nyles crawls into a cave, warning Sarah not to follow him. Concerned for Nyles, Sarah follows him and is sucked into a vortex.
Sarah wakes up and finds it is November 9 again. She confronts Nyles in the pool, which results in Tala tripping and breaking two of her teeth. Nyles explains that, by following him into the cave, Sarah has become stuck in a time loop with him. Nyles, having been in the loop for some time, has stopped wearing formal attire to the wedding, engaged in day-drinking, forgotten what his job is, and has had a series of one-night stands.
Sarah tries many methods to escape, such as walking back into the cave, driving back to Austin, attempting acts of selflessness, and committing suicide, but all fail. Nyles and Sarah spend many days together, engaging in reckless or hedonistic activities. Nyles reveals that the man who shot him, Roy, is a family man from Irvine; Nyles once did drugs with him at the wedding, and inadvertently trapped him in the time loop. In revenge, Roy sometimes hunts Nyles, torturing or murdering him.
Nyles and Sarah camp out in the desert where they consume magic mushrooms, witness a herd of brachiosauruses and have sex. The next day, it is revealed that Sarah has been waking up in Abe's room having spent the night of November 8 with him and he advises her to leave before she is seen. A guilt-ridden Sarah refuses to talk to Nyles about their previous night, expressing that everything they do is meaningless. They are pulled over by a police officer who turns out to be Roy. Sarah rams into Roy with the police car, badly injuring him. After an argument during which Nyles says that pain still matters in the loop, he admits to Sarah that he had sex with her numerous times before she entered the time loop, something that he had lied about before. A disgusted Sarah runs in front of an oncoming truck, killing herself and restarting the day.

Who plays who in the Palm Springs movie cast?

Here is the full cast and characters of "Palm Springs" movie. Actors and actresses are sorted mostly in credits order.

"Palm Springs" movie is rated "R", according to the MPAA film rating system.

What are critics and audiences saying about Palm Springs movie?

More information and reviews on "Palm Springs" movie you can get on the following websites.