Is there a trailer for Flora & Ulysses movie? 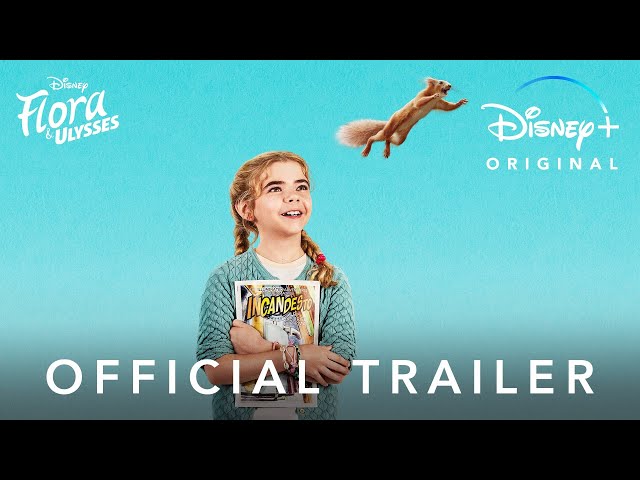 What is Flora & Ulysses movie plot?

Flora Buckman (Matilda Lawler) is a cynical 10-year-old girl who likes to get lost in the world of superheroes from the comics she reads. Her father George (Ben Schwartz) is a failed comic book author who has since taken a job at an office supply store called Binders Keepers overseen by his boss Chad (Jesse Reid) while her mother Phyllis (Alyson Hannigan) is a romance novelist who had won an award in the past, but has since hit creator's block. Their hardships have caused them to separate.
Flora's next door neighbor Tootie experiences trouble with her Ulysses brand vacuum that begins running amok in her yard. A regular squirrel is sucked into it just as the machine dies. Flora resuscitates the squirrel and takes to naming him after the vacuum. The next day, Ulysses uses Phyllis' vintage typewriter to type "Squirtel. I am. Ulysses. Born anew". Flora quickly discovers that Ulysses is not only sentient, but seems to possess superpowers as well. She regales her findings to Tootie's visiting nephew William Spiver (Benjamin Evan Ainsworth) who suffers from "hysterical blindness" due to stress.
When George arrives to see Flora, he and Phyllis discover Ulysses and he agrees to drop him off while he takes Flora out for the day. They stop by the diner Do-Nut World first, but Rita (Kate Micucci) the waitress discovers Ulysses who begins to make a mess in the diner. George sees firsthand that Ulysses has superhuman flight and strength. Father and daughter grab him and flee back to his apartment which is monitored by a feisty cat named Mr. Klaus. They see his neighbor Dr. Meescham (Anna Deavere Smith) who tells them that Ulysses is fine and also witnesses his intelligence.

Who plays who in the Flora & Ulysses movie cast?

Here is the full cast and characters of "Flora & Ulysses" movie. Actors and actresses are sorted mostly in credits order.

What are Flora & Ulysses filming details?

"Flora & Ulysses" movie is rated "PG", according to the MPAA film rating system.

What are critics and audiences saying about Flora & Ulysses movie?

More information and reviews on "Flora & Ulysses" movie you can get on the following websites.

Flora & Ulysses on IMDB is available at:

Flora & Ulysses on Wikipedia is available at: