Here are "I Feel Pretty" movie trailer, plot summary, full cast and characters, release date, streaming services and everything we know so far.

Is there a trailer for I Feel Pretty movie?

STXfilms on Thursday, February 08, 2018 released the trailer for "I Feel Pretty" you can watch here:
I Feel Pretty | Official Trailer | Own It Now on Digital HD, Blu Ray & DVD. 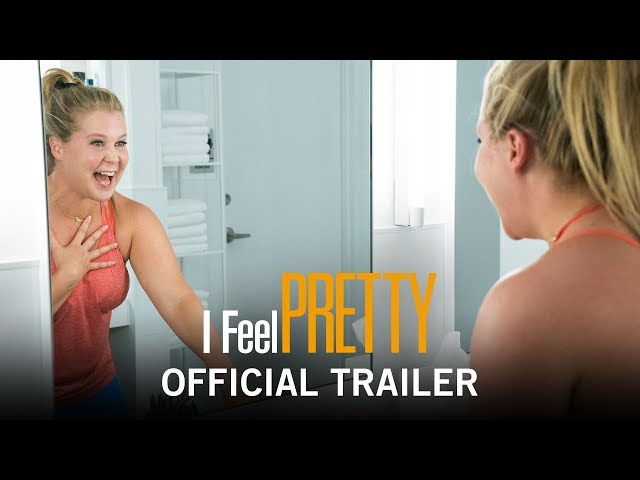 What is I Feel Pretty movie plot?

Here is a short review of "I Feel Pretty" movie plot summary.

Renee Bennett (Amy Schumer) struggles with low self-esteem and manages the website for cosmetics firm Lily LeClaire (Lauren Hutton). She decides not to apply for a receptionist position at the corporate headquarters, her dream job, after reading the job description's emphasis on being beautiful. She wishes at a fountain to be beautiful and the next day she falls, hitting her head. Waking up with the belief that her appearance has magically changed, Renee approaches the world with newfound confidence. When a man named Ethan (Rory Scovel) speaks to her innocuously, she insists that they exchange numbers. She applies for the receptionist position and is hired by CEO Avery LeClaire (Michelle Williams). Renee asks Ethan out and enters a "bikini body" contest. She wins over the crowd but loses the competition, and tells Ethan that she doesn't need external validation to know she's beautiful. Ethan praises her self-knowledge, and she appreciates his openness over not yet knowing himself. They meet again for a picnic, after which they spend the night together.
Renee earns her coworkers' respect with her insight into the company's new diffusion line. Avery confides in Renee her insecurity over her high-pitched voice, feeling that she is not taken seriously. Avery invites Renee and Ethan to a dinner meeting with her brother Grant (Tom Hopper) and their grandmother, company founder Lily LeClaire (Anastagia Pierre). Renee builds rapport with Lily, and Avery invites Renee to an important business meeting in Boston to give a key presentation. Renee becomes superficial in her treatment of people. She is judgmental of LeClaire visitors who are not fashionable or glamorous, and ditches her friends Vivian (Aidy Bryant) and Jane (Busy Philipps) to attend an exclusive party with her coworkers. In Boston, she nearly gives in to Grant's romantic overtures, avoiding a kiss when she receives a message from Ethan. She locks herself in the bathroom to avoid Grant, and while questioning her sense of self and her recent behavior, she suffers a new head injury in a fall in the shower. When she awakens, she perceives her real physical appearance.

Who plays who in the I Feel Pretty movie?

Here is the full cast and characters of "I Feel Pretty" movie. Actors and actresses are sorted mostly in credits order.

When is I Feel Pretty movie release date?

What are I Feel Pretty filming details?

"I Feel Pretty" movie is rated "PG-13", according to the MPAA film rating system.

What are critics and audiences saying about I Feel Pretty movie?

"I Feel Pretty" movie got average rating from critics. IMDB rating is 5.5/10. Rotten Tomatoes rating is 35/100. The audience dislikes the film either. Audiences polled by CinemaScore gave the film an average grade of "B+" on a scale ranging from A+ to F.

More information and reviews on "I Feel Pretty" movie you can get on the following websites.

I Feel Pretty on IMDB is available at:

I Feel Pretty on Wikipedia is available at: