Is there a trailer for Paddleton movie? 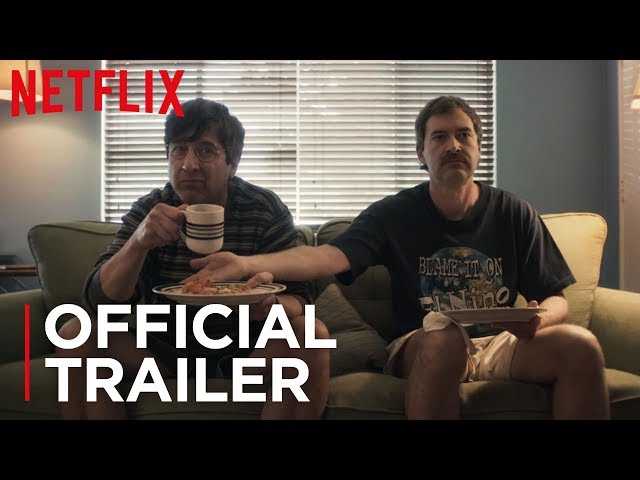 What is Paddleton movie plot?

Here is a short review of "Paddleton" movie plot summary.

Middle-aged Michael (Mark Duplass) is diagnosed with terminal stomach cancer and decides to end his life. This upsets his upstairs neighbor Andy (Ray Romano), as they are each other's best (and only) friends and help each other escape from their menial jobs.
Andy encourages Michael to fight the cancer, but Michael refuses to prolong any suffering. As per Michael's wishes, they make pizzas together, watch kung fu movies, solve jigsaw puzzles, and play Paddleton, a game of their own creation. Andy promises to finally tell Michael a rousing halftime speech that he has been working on in secret.
Andy is reluctant to help Michael end his own life, but agrees to join him on a road trip to the closest pharmacy that will fill the prescription, six hours away. During their drive, they discuss genie-in-a-bottle style wishes and stop to visit an ostrich farm on the way. They pick up Michael's prescription and check into a hotel, where they are mistaken for a gay couple. While Michael naps, Andy buys a mini safe where he puts the medication and withholds the combination.
They go to an open mic night, where a nervous Andy finally delivers his halftime speech to himself in the bathroom mirror before helping Michael perform a scene from their favorite kung fu movie onstage. They later break hotel rules, using a Jacuzzi after-hours while drinking. Caught by the hotel owner, she ends up joining them and flirting with Andy, leading Michael to go back to their room. Andy is uncomfortable as she mentions her deceased husband being "all around her."

Who plays who in the Paddleton movie cast?

Here is the full cast and characters of "Paddleton" movie. Actors and actresses are sorted mostly in credits order.

When is Paddleton movie release date?

"Paddleton" movie release date was scheduled to be on February 1, 2019 (Sundance, Sundance Film Festival) and on February 22, 2019 (United States) distributing by Netflix.

What are Paddleton filming details?

What are critics and audiences saying about Paddleton movie?

"Paddleton" movie got high rating from critics. IMDB rating is 7.2/10. Rotten Tomatoes rating is 88/100. The audience also loves the film.

More information and reviews on "Paddleton" movie you can get on the following websites.

You can watch Paddleton online streaming on Netflix:

Paddleton on IMDB is available at:

Paddleton on Wikipedia is available at: