Here are "The Snowman" movie trailer, plot summary, full cast and characters, release date and everything we know so far.

Is there a trailer for The Snowman movie?

Universal Pictures on Wednesday, July 19, 2017 released the trailer for "The Snowman" you can watch here:
The Snowman - In Theaters October 20 - Official Trailer (HD). 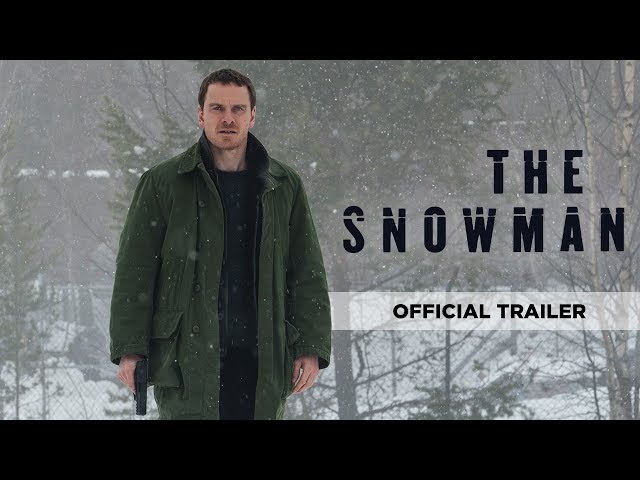 What is The Snowman movie plot?

Here is a short review of "The Snowman" movie plot summary.

At a remote cabin, a boy and his mother, Sarah, are visited by his abusive biological father, a police officer named Jonas. Jonas strikes and sexually assaults Sarah, who threatens to tell Jonas's wife about their illegitimate son. Jonas leaves and Sarah follows in her car with her son. During the chase, she drifts into a catatonic state, letting go of the steering wheel. The boy escapes as the car crashes into a lake. Despite his pleading, his mother remains seated and sinks.
Years later, Harry Hole (Michael Fassbender) is an inspector with the Norwegian Police Service's Oslo district. He struggles with alcoholism and a recent break-up with Rakel (Charlotte Gainsbourg), mother of a boy named Oleg whom Harry loves. After receiving a mysterious letter signed with a childlike drawing of a snowman, Harry meets new recruit Katrine Bratt (Rebecca Ferguson) and accompanies her investigation into the disappearance of Birte Becker (Genevieve O'Reilly), a woman with a husband and daughter. The two find a snowman at Becker's home.
Harry realizes Bratt has taken police files without permission. He learns she's looking for a link between several missing persons cases and another case, from nine years before, that was investigated by an alcoholic inspector named Gert Rafto (Val Kilmer). Katrine convinces Harry to join a new investigation into the disappearance of Sylvia Otterson, who they find alive and well at her farm. Shortly after they leave, a masked figured beheads Sylvia with an electrified cable harness. A call comes in requesting Harry specifically so he and Katrine return to the farmhouse. There they meet Sylvia's identical twin, Ane. Sylvia's body is inside her barn and her head atop a snowman.

Who plays who in the The Snowman movie?

Here is the full cast and characters of "The Snowman" movie. Actors and actresses are sorted mostly in credits order.

When is The Snowman movie release date?

What are The Snowman filming details?

"The Snowman" movie is rated "R", according to the MPAA film rating system.

What are critics and audiences saying about The Snowman movie?

"The Snowman" movie got low rating from critics. IMDB rating is 5.1/10. Rotten Tomatoes rating is 7/100. The audience hates the film either. Audiences polled by CinemaScore gave the film an average grade of "D" on a scale ranging from A+ to F.

More information and reviews on "The Snowman" movie you can get on the following websites.

The Snowman on IMDB is available at:

The Snowman on Wikipedia is available at: