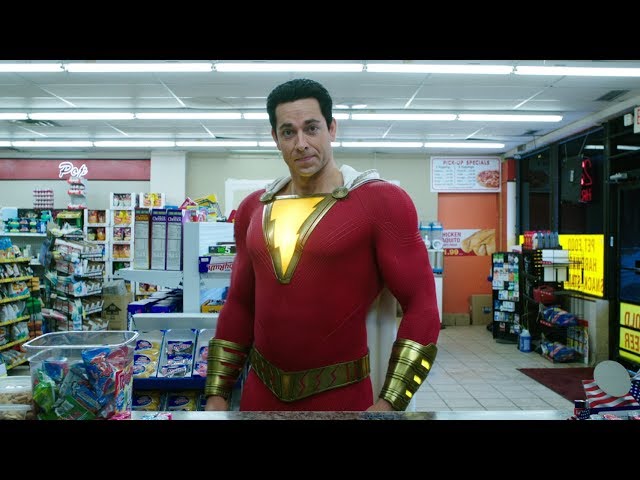 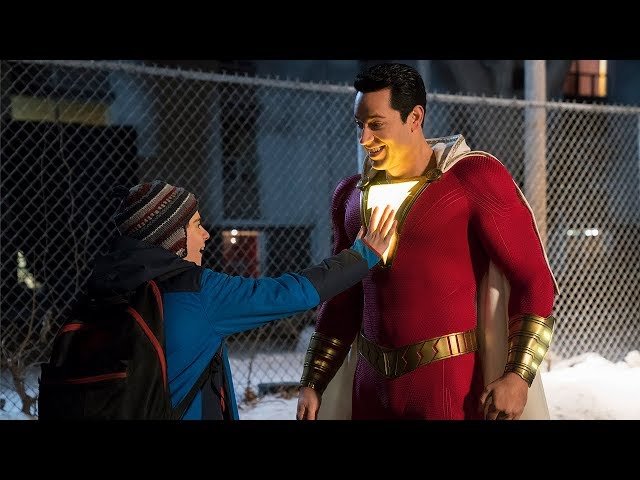 In 1974 in upstate New York, young Thaddeus Sivana (Mark Strong) is riding in a car with his father and brother during a snowstorm when he is suddenly transported to the Rock of Eternity, a magical temple in another dimension. There, the ancient wizard Shazam has spent centuries searching for someone pure of heart on whom to bestow his power and name as champion, after the previous champion released the Seven Deadly Sins, which killed the rest of the Council of Wizards. Thaddeus is tempted by the Eye of Sin, through which he hears the voices of the Sins, trapped in stone statues, promising him power if he will free them. The wizard deems Thaddeus unworthy and magically returns him to the car, where his abusive father and brother refuse to believe his story and his father's verbal abuse and inattentiveness leads to an accident which results in his father being paralysed from the waist down and his brother and him blaming Thaddeus. The Sins send Thaddeus a message via an 8-Ball toy telling him to find them.
In present-day Philadelphia, 14-year-old foster child Billy Batson (Asher Angel) continually runs away from foster homes to search for his birth mother, from whom he became separated while at a carnival ten years earlier. He locks some police officers in a store and uses their computer to try finding his mother which is unsuccessful. He is placed in a group home run by Víctor and Rosa Vásquez (Marta Milans), with five other foster children: Mary Bromfield (Grace Fulton), Pedro Peña (Jovan Armand), Eugene Choi (Ian Chen), Darla Dudley (Faithe Herman), and superhero enthusiast Freddy Freeman (Jack Dylan Grazer). Meanwhile, the embittered Sivana, through the numerous reports of similar experiences to his, succeeds in his lifelong quest to find a way back to the Rock of Eternity by drawing the 7 symbols on a door. He steals the Eye of Sin, becoming the Sins' vessel, bests the wizard, and uses his newfound power to kill his father, brother, and Sivana Industries' board of directors.

Who plays who in the Shazam! movie cast?

"Shazam!" movie got high rating from critics. IMDB rating is 7/10. Rotten Tomatoes rating is 90/100. The audience also loves the film. Audiences polled by CinemaScore gave the film an average grade of "A" on a scale ranging from A+ to F.