Here are "The Upside" movie trailer, plot summary, full cast and characters, release date, streaming services and everything we know so far.

Is there a trailer for The Upside movie?

STXfilms on Wednesday, October 03, 2018 released the trailer for "The Upside" you can watch here:
The Upside | Official Trailer | Own It Now On Digital HD, Blu-Ray & DVD. 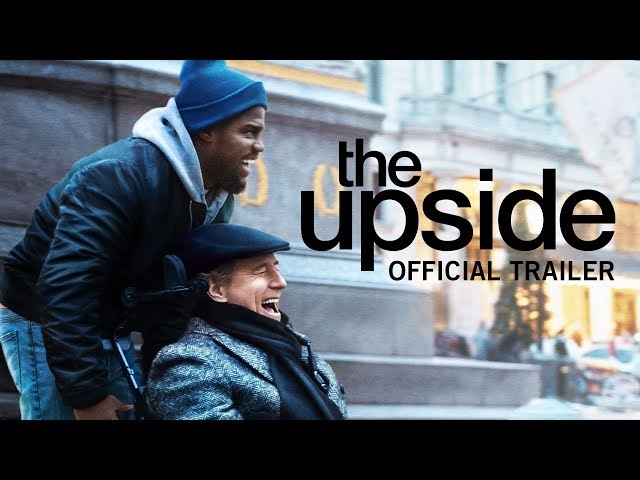 What is The Upside movie plot?

Here is a short review of "The Upside" movie plot summary.

Speeding through New York City in a Ferrari, Dell Scott (Kevin Hart) and quadriplegic Philip Lacasse (Bryan Cranston) are pulled over by the NYPD. Dell convinces the officers that he is rushing Philip to the emergency room; Philip grudgingly plays along, and the two are escorted to the hospital.
Six months earlier, Dell meets with his parole officer and needs signatures to prove he is seeking a job or he will be held in violation of his parole. He enters a building seeking a job in the penthouse home of Philip, a wealthy quadriplegic. Philip, with his assistant Yvonne Pendleton (Nicole Kidman), is interviewing candidates for the position of his "life auxiliary" caregiver. Dell barges in and demands a signature for his parole officer. Intrigued, Philip offers him the job over Yvonne's objections, but Dell declines.
Dell visits his ex-wife Latrice (Aja Naomi King) and son Anthony at their dilapidated apartment, but neither is willing to accept Dell back into their lives. He gives Anthony a book he stole from Philip's library. Dell then accepts Philip's offer; Yvonne stipulates that he must show he can handle his responsibilities, and "three strikes" will get him immediately fired. Dell, having no training, is initially daunted, despite guidance from Philip's physical therapist Maggie (Golshifteh Farahani), and quickly earns two strikes. Dell leaves to give his first paycheck to Latrice and asks for the stolen book back, but she refuses. Upon his return, Yvonne gives him a third strike for his unexplained absence, but Philip covers for him.
When Philip explains his strict Do Not Resuscitate order, Dell realizes he has lost the will to live, but when he finds Philip struggling to breathe, refuses to allow him to die. Dell takes Philip out into the city, where they share a joint to ease Philip's neurogenic pain. Dell and Philip begin to bond, and Philip tells Dell that he was paralyzed in a paragliding accident, and reveals the pain of losing his wife. Dell adjusts to caring for Philip, even modifying his wheelchair, and is introduced to opera and modern art; he creates his own painting, which Philip displays in the penthouse.

Who plays who in the The Upside movie cast?

Here is the full cast and characters of "The Upside" movie. Actors and actresses are sorted mostly in credits order.

When is The Upside movie release date?

What are The Upside filming details?

"The Upside" movie is rated "PG-13", according to the MPAA film rating system.

What are critics and audiences saying about The Upside movie?

"The Upside" movie got average rating from critics. IMDB rating is 7/10. Rotten Tomatoes rating is 43/100. But the audience loves the film. Audiences polled by CinemaScore gave the film an average grade of "A" on a scale ranging from A+ to F.

More information and reviews on "The Upside" movie you can get on the following websites.

The Upside on IMDB is available at:

The Upside on Wikipedia is available at: