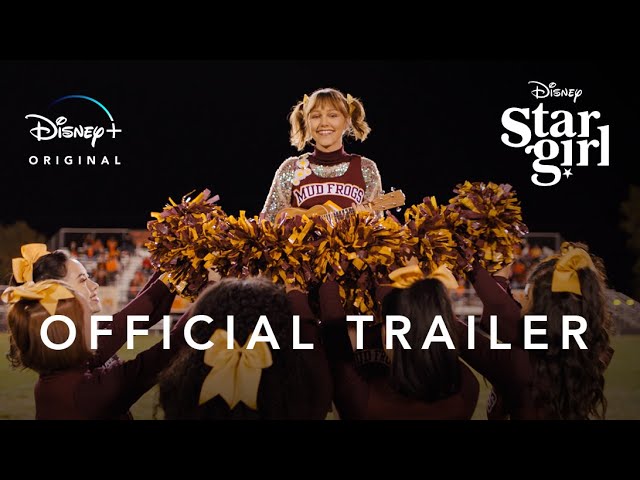 After Leo Borlock's father died, he began to wear a porcupine tie in remembrance of him. At a new school, he was beaten up and his tie was cut. Since then, on each birthday, he has received a new porcupine tie from an unknown person, but he does not wear them in public. In high school, Leo (Graham Verchere) plays trumpet in the marching band and helps his friend Kevin Singh (Karan Brar), a member of the A.V. club, host an interview show. One day, a free-spirited girl, Stargirl Caraway (Grace VanderWaal), arrives and makes an impression on Leo when she sings "Happy Birthday" to him on a ukulele in front of the school. Later, while their losing football team, the Mudfrogs, are playing, Stargirl performs a song, "Be True to Your School", that energizes them, and they almost get their first win. Kevin and Leo invite her onto their show, but she politely declines.
Stargirl becomes a good luck charm for the football team when she sings "We Got the Beat". She begins hanging out with Leo and tries to get him to come out of his shell. Archie (Giancarlo Esposito), the owner of the local paleontologist camp, tells Leo that Stargirl, lives with her single mother and was homeschooled much of her life. She learned about Leo through Archie. Later, Stargirl tries out for the Speech regionals against Kevin and wins with her unusual speech on rats. While anonymously returning a bike to a boy who was in the hospital, Leo mentions the ties, but Stargirl denies any knowledge of it. Stargirl gives a song suggestion to Leo ("Thirteen") and kisses him for the first time. They begin dating.

Who plays who in the Stargirl movie cast?