Is there a trailer for Long Weekend movie? 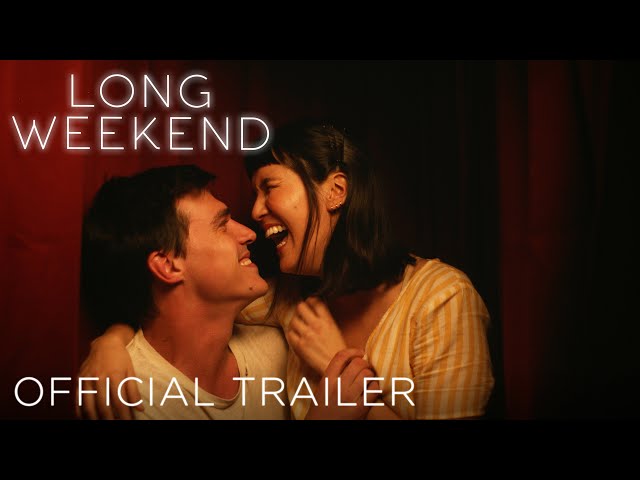 What is Long Weekend movie plot?

Bart (Finn Wittrock) is down on his luck after he has to take a crummy job at a medical office and move in to the garage at the house of his best friend Doug (Damon Wayans Jr.), who is married to Rachel (Casey Wilson) with two kids. He is broke after failing to make any money off of the novel he wrote and depressed from his girlfriend Whit (Jess Jacobs) breaking up with him, ignoring his psychiatrist's phone calls.
He goes to watch a movie and falls asleep drunk in the theater, awaking to a random girl named Vienna (Zoe Chao) telling him the movie is over. They start talking and actually hit it off right away, going on a date at a bar and then having sex at Vienna's motel room all in that same day. However, things seem odd with Vienna during that time when Bart discovers she is new in town and has wads of cash along with no ID and no phone. Doug and Rachel are just happy he's getting laid but do warn him to be careful with her. Bart and Vienna then soon start to connect over their mothers both having cancer, but Bart's mom had passed years ago yet he was inspired by her to write his novel after she grew peaceful and more concerned about her happiness in her last few months.
Bart starts freaking out when he confronts Vienna about her oddities and she either tries to change the subject or gives vague answers, such as she works for the government. They go to Bart's old apartment, which is still in the process of being sold and moving in the new tenants, to discuss it in private. She reveals that she is from the future, working for a secret government branch that has discovered time travel in 2052 and using it to buy stocks that will be valuable at that time so she can cure her mom of cancer. Bart of course thinks she's crazy at first, but becomes convinced by her calm explanation and when she plays her favorite song on his guitar. A song he's never heard before, leading them to have makeup sex.

Who plays who in the Long Weekend movie cast?

Here is the full cast and characters of "Long Weekend" movie. Actors and actresses are sorted mostly in credits order.

What are Long Weekend filming details?

"Long Weekend" movie is rated "R", according to the MPAA film rating system.

What are critics and audiences saying about Long Weekend movie?

More information and reviews on "Long Weekend" movie you can get on the following websites.

Long Weekend on IMDB is available at:

Long Weekend on Wikipedia is available at: