Is there a trailer for Smiley Face Killers movie? 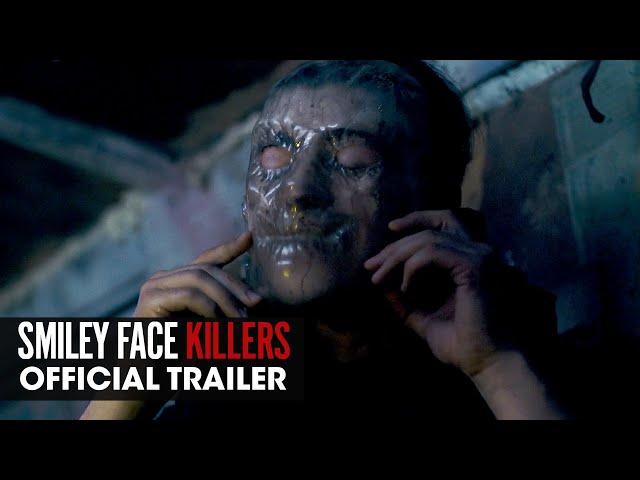 The film opens with the abduction and murder of two unrelated victims by a hooded killer in a white van. The only clue linking the murders is the presence of smiley face graffiti near the body. The film then shows Jake (Ronen Rubinstein), a university student who believes that someone is stalking him, as they have left him a map marking the locations of the prior smiley face murders along with creepy text messages and photos. His girlfriend Keren (Mia Serafino) is concerned that he is off his psychiatric medication, particularly after he grows jealous of her talking to her ex-boyfriend Rob (Cody Simpson). Jake relates the strange events to his friend Adam (Garrett Coffey), who theorizes that Rob may be doing them out of jealousy. He begins to investigate the map and messages with more earnest, all the time unaware that the stalker, a mysterious hooded figure, has murdered his roommate Devon (Daniel Covin).
Jake discovers messages from Rob on Keren's phone and the two argue, causing her to further worry and assume that his concerns are due to non-compliance with his meds. He continues the fight later when he discovers Rob at a party, during which he accidentally assaults Keren. Upset, Jake leaves the party and is swiftly abducted by his stalker and two other hooded figures, the latter of whom begin to drain his blood. An attempt to free himself is only momentarily successful and results in the death of a gas station clerk and a group of teenagers who happened to drive up. Jake is then killed by the figures, who dump his body and graffiti a smiley face. Devon's death is eventually discovered and it's generally believed that Jake murdered him. The film ends with the hooded figures stalking their next victim.

Who plays who in the Smiley Face Killers movie?

Here is the full cast and characters of "Smiley Face Killers" movie. Actors and actresses are sorted mostly in credits order.

What are critics and audiences saying about Smiley Face Killers movie?

More information and reviews on "Smiley Face Killers" movie you can get on the following websites.

Smiley Face Killers on IMDB is available at:

Smiley Face Killers on Wikipedia is available at: