Is there a trailer for Justice League Dark: Apokolips War movie? 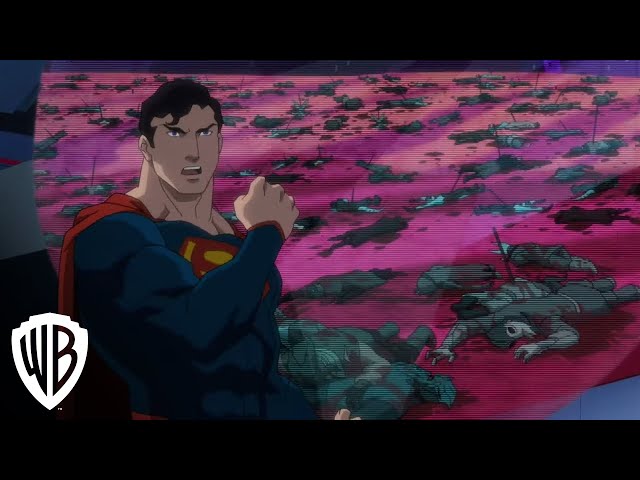 Following his two failed attempts at taking over Earth, Darkseid and his armies have conquered countless worlds. In response, the Justice League travel to Apokolips to bring the fight to him while the Teen Titans remain on Earth as its defense. Unknown to the League, Darkseid spies on their plan of attack through Cyborg due to the connection he still has with the Mother Box, and upon arrival to Apokolips, the League is attacked by Paradooms - genetic hybrids of Parademons and Doomsday - which prove to be extremely invulnerable and thus results in the heroes either being killed or enslaved by Darkseid while his forces descend on Earth and subdue the Titans, slaughtering a majority of them.
Two years later, Darkseid has successfully conquered Earth. Lex Luthor (Rainn Wilson) has become a New God representative and reports to Batman, now Darkseid's lieutenant due to being brainwashed via the Mobius Chair, on the progress of the three "Reaper" devices that are mining Earth's core. Wonder Woman, Martian Manhunter, Mera, Hawkman, and Starfire work as Darkseid's newly converted mechanical Furies as he continues conquering planets. The surviving heroes on Earth blame Clark Kent (Jerry O'Connell) for their failure. Meanwhile, Raven suffers from the strain of confining her father Trigon, who is constantly attempting to escape from his magical prison, and the loss of her team. After Clark rescues her from her latest suicide attempt, they recruit Etrigan (Ray Chase) the Demon, who has been morose ever since the death of Jason Blood, and John Constantine (Matt Ryan), who blames himself for letting his lover Zatanna die when he inexplicably fled during the battle at Apokolips, to find Batman's son Damian Wayne (Stuart Allan). Constantine locates Damian, now the leader of the League of Assassins, and he, along with Lady Shiva (Sachie Alessio), reluctantly join the heroes. Damian also reveals that he revived his adoptive brother and fellow teammate Dick Grayson, who was killed during the attack on Earth, via the Lazarus Pits, though he lost his sanity in the process, because of which he was kept locked up.

Who plays who in the Justice League Dark: Apokolips War movie?

Here is the full cast and characters of "Justice League Dark: Apokolips War" movie. Actors and actresses are sorted mostly in credits order.

What are critics and audiences saying about Justice League Dark: Apokolips War movie?

More information and reviews on "Justice League Dark: Apokolips War" movie you can get on the following websites.

Justice League Dark: Apokolips War on IMDB is available at:

Justice League Dark: Apokolips War on Wikipedia is available at: