Here are "Playing with Fire" movie trailer, plot summary, full cast and characters, release date, streaming services and everything we know so far.

Is there a trailer for Playing with Fire movie?

Paramount Pictures on Wednesday, July 17, 2019 released the trailer for "Playing with Fire" you can watch here:
Playing with Fire - Official Trailer - In Theatres November. 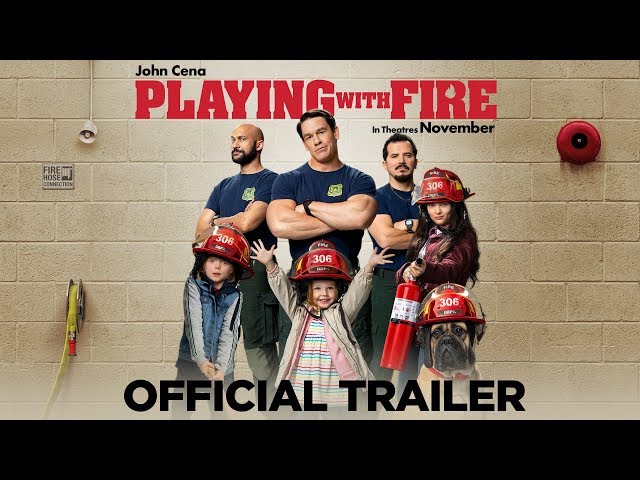 What is Playing with Fire movie plot?

Here is a short review of "Playing with Fire" movie plot summary.

Superintendent Jake Carson (John Cena) is the commanding officer of a group of smokejumpers in remote California woodlands. Carson is capable in a crisis and takes tremendous pride in his work, diving into dangerous situations to rescue civilians alongside his team - overtly loyal Mark Rogers (Keegan-Michael Key), nervy and neurotic Rodrigo Torres (John Leguizamo), and "Axe", a huge mute who carries his fireman's pulaski everywhere. After rescuing three children from a burning cabin, Carson is contacted by the universally admired division, Commander Richards (Dennis Haysbert). Richards praises Carson's work and shortlists Carson for his replacement, Carson's dream job.
Rogers advises Carson that they are responsible for the welfare of the children Brynn (Brianna Hildebrand), Will (Christian Convery), and Zoey (Finley Rose Slater) under the "Safe Haven Laws", which requires law enforcement and first responders to care for children until they are released to a parent or guardian. Carson leaves a voicemail for the children's mother who texts back saying that they are on their way. Carson's attempts to complete his application for division commander are undermined by the children running haywire around the station, and the arrival of Carson's ex-girlfriend, environmental Doctor Amy Hicks (Judy Greer), a local who protests the smokejumpers taking water from endangered toad habitats to fight fires. Carson tries to offload the children onto Hicks, who refuses.
Despite the mayhem, the rest of the smokejumpers begin to bond with the children, with toddler Zoey warming up the brutish Axe (Tyler Mane) and Torres teaching Will how to navigate dangerous situations. Brynn pays lip service to Rogers' admiration of Carson, but then stages an escape on the station's ATV, spilling oil and slashing tires to prevent chase. Carson catches them by off-roading on a little girl's bike and corners the children on a dirt road. At Will's prompting, Brynn admits that they are orphans on the run from foster care, fearing that they will be separated. The text messages were from Brynn herself. The group camp out overnight and Carson promises to hold off calling Child Services until after Zoey's birthday in two days.

Who plays who in the Playing with Fire movie cast?

Here is the full cast and characters of "Playing with Fire" movie. Actors and actresses are sorted mostly in credits order.

When is Playing with Fire movie release date?

What are Playing with Fire filming details?

"Playing with Fire" movie is rated "PG", according to the MPAA film rating system.

What are critics and audiences saying about Playing with Fire movie?

"Playing with Fire" movie got average rating from critics. IMDB rating is 5.1/10. Rotten Tomatoes rating is 23/100. Audiences polled by CinemaScore gave the film an average grade of "B+" on a scale ranging from A+ to F.

More information and reviews on "Playing with Fire" movie you can get on the following websites.

Playing with Fire on IMDB is available at:

Playing with Fire on Wikipedia is available at: