Is there a trailer for Little Women movie? 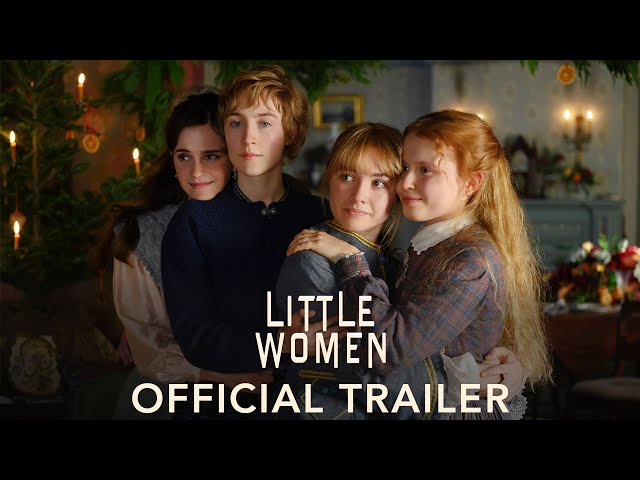 What is Little Women movie plot?

In 1868, Jo March (Saoirse Ronan), a teacher in New York City, goes to Mr. Dashwood (Tracy Letts), an editor who agrees to publish a story she has written. Her youngest sister, Amy (Florence Pugh), who is in Paris with their Aunt March (Meryl Streep), attends a party with their childhood friend and neighbor, Laurie (Timothée Chalamet). Amy becomes angry at Laurie's drunken behavior, prompting him to mock her for spending time with wealthy businessman Fred Vaughn (Dash Barber). In New York, Jo becomes hurt when Friedrich Bhaer (Louis Garrel), a professor infatuated with her, constructively criticizes her writing, causing her to end their friendship. After learning from a letter that her younger sister Beth's illness has worsened, Jo returns home to Concord, Massachusetts.
At a party with her elder sister, Meg (Emma Watson), seven years earlier, Jo befriends Laurie. On Christmas morning, the girls' mother, "Marmee", persuades them to give their breakfast to their poor neighbor Mrs. Hummel (Sasha Frolova) and her starving children. After returning home, they find a table full of food given to them by their neighbor and Laurie's grandfather, Mr. Laurence (Chris Cooper). Marmee (Laura Dern) then reads a letter from their father fighting in the American Civil War. Jo regularly visits Aunt March to read to her, hoping Aunt March would invite her to Europe.
When Meg, Jo, Laurie, and John - Laurie's tutor and Meg's eventual husband - go to the theater, a jealous Amy burns Jo's writings. The next morning, Amy, wanting to make up with an upset Jo, chases her and Laurie onto a lake where the two are skating. They save Amy after she falls through the ice. Mr. Laurence notices Beth's quiet demeanor and invites her to play his late daughter's piano in his house. Meg sits down with John in the present after buying an expensive fabric they couldn't afford, during which she expresses her unhappiness about being poor. Laurie visits Amy to apologize for his behavior and urges her not to marry Fred but instead marry him. Though in love with Laurie, Amy refuses, upset at always being second to Jo. Despite this, she turns down Fred's proposal.

Who plays who in the Little Women movie cast?

Here is the full cast and characters of "Little Women" movie. Actors and actresses are sorted mostly in credits order.

What are Little Women filming details?

"Little Women" movie is rated "PG", according to the MPAA film rating system.

Principal photography began in Boston in October 2018, with Harvard, Massachusetts, serving as the main location.

What are critics and audiences saying about Little Women movie?

"Little Women" movie got high rating from critics. IMDB rating is 7.8/10. Rotten Tomatoes rating is 95/100. Audiences polled by CinemaScore gave the film an average grade of "A-" on a scale ranging from A+ to F.

More information and reviews on "Little Women" movie you can get on the following websites.

Little Women on IMDB is available at:

Little Women on Wikipedia is available at: