Is there a trailer for First Cow movie? 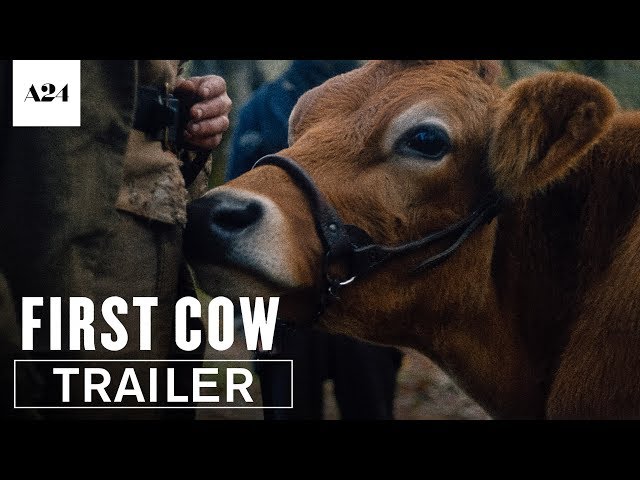 What is First Cow movie plot?

In present day, a woman walking her dog on the riverside discovers two skeletons lying together in a shallow grave.
In 1820, Otis "Cookie" Figowitz (John Magaro) is a quiet chef traveling in Oregon Country with a group of loud and aggressive fur trappers who harass Cookie for not bringing them enough food while foraging. One night, he comes across King-Lu (Orion Lee), a Chinese immigrant on the run for killing a Russian man. Cookie allows Lu to hide in his tent for the night and watches him escape across the river the next day.
Cookie and Lu later reunite and spend several days bonding at Lu's shack. Lu talks about his past traveling the world and his desire to own a farm. Cookie talks about his ambition to one day open either a bakery or a hotel in San Francisco. Cookie learns of the first milk cow in the region, owned by the Chief Factor (Toby Jones), a wealthy English man with the only proper house in the settlement. The cow's mate and calf died on its journey to Oregon, making it the only cow. Cookie reminisces about his days as a baker's assistant in Boston and tells Lu that he could use some of the cow's milk to make baked goods. They sneak onto the Chief Factor's property at night, Cookie milking the cow and Lu keeping watch from a tree. They manage to get enough milk to bake a batch of biscuits without being caught. While Cookie is unsatisfied with the result, wishing it could be sweeter, Lu points out that it tastes better than any food the outpost has and that it could easily sell for a lot of money.
They take their biscuits to the market and offer to sell them. When asked how they're made, Lu claims it's a "Chinese secret." The biscuits become popular instantly and they sell out their first batch within minutes. In the days that follow, lines begin to form for people to try their biscuits.

Who plays who in the First Cow movie cast?

Here is the full cast and characters of "First Cow" movie. Actors and actresses are sorted mostly in credits order.

"First Cow" movie release date was scheduled to be on August 30, 2019 (Telluride) and on March 6, 2020 (United States) distributing by A24, Madman Entertainment, Front Row Filmed Entertainment and The Searchers.

What are First Cow filming details?

"First Cow" movie is rated "PG-13", according to the MPAA film rating system.

What are critics and audiences saying about First Cow movie?

More information and reviews on "First Cow" movie you can get on the following websites.

First Cow on IMDB is available at:

First Cow on Wikipedia is available at: