Here are "Black and Blue" movie trailer, plot summary, full cast and characters, release date, streaming services and everything we know so far.

Is there a trailer for Black and Blue movie?

Sony Pictures Entertainment on Sunday, June 23, 2019 released the trailer for "Black and Blue" you can watch here:
BLACK AND BLUE - Official Trailer (HD). 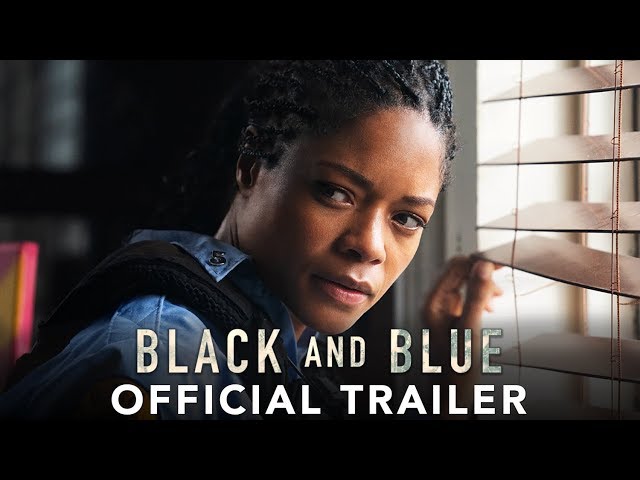 What is Black and Blue movie plot?

Here is a short review of "Black and Blue" movie plot summary.

U.S. Army veteran Alicia West (Naomie Harris) returns to her hometown in New Orleans where she is recruited into the city's police department. Alicia is reminded by her new partner Kevin Jennings (Reid Scott) about the differences between residing in the community she grew up in and the police department.
In order for Jennings to get home to date night with his wife, West takes his place in a double shift with another member of the force, Brown. He gets a call in the middle of their shift and they head over to meet with his CI in an abandoned building where he tells her to wait in the car. Alicia hears gunfire coming from the building where Brown went in and heads over, wearing a vest fitted with a body camera. There, Alicia witnesses detective Terry Malone (Frank Grillo), Brown and an enforcer named Smitty (Beau Knapp) murder an unarmed drug dealer. When Malone attempts to explain away the situation to her, Smitty panics upon seeing Alicia's body cam and shoots at her, causing Alicia to fall through the floor onto the ground below.
A wounded Alicia escapes while she is being tracked by Malone and his men. When a fellow police officer arrives, Alicia realizes they are working with Malone, forcing her to hide out in the store of Milo Jackson (Tyrese Gibson), a member of the community who is reluctant to hide her. She tries to get help from her partner, Jennings, but she finds out that he is one of the cohorts and she runs away from him. Meanwhile, Malone blames West for the shooting and manipulates criminal kingpin Darius (Mike Colter) into putting out an open bounty on West because one of the kids that Malone murdered was Darius's nephew.

Who plays who in the Black and Blue movie cast?

Here is the full cast and characters of "Black and Blue" movie. Actors and actresses are sorted mostly in credits order.

When is Black and Blue movie release date?

What are Black and Blue filming details?

"Black and Blue" movie is rated "R", according to the MPAA film rating system.

What are critics and audiences saying about Black and Blue movie?

"Black and Blue" movie got average rating from critics. IMDB rating is 6.4/10. Rotten Tomatoes rating is 52/100. Audiences polled by CinemaScore gave the film an average grade of "A-" on a scale ranging from A+ to F.

More information and reviews on "Black and Blue" movie you can get on the following websites.

Black and Blue on IMDB is available at:

Black and Blue on Wikipedia is available at: