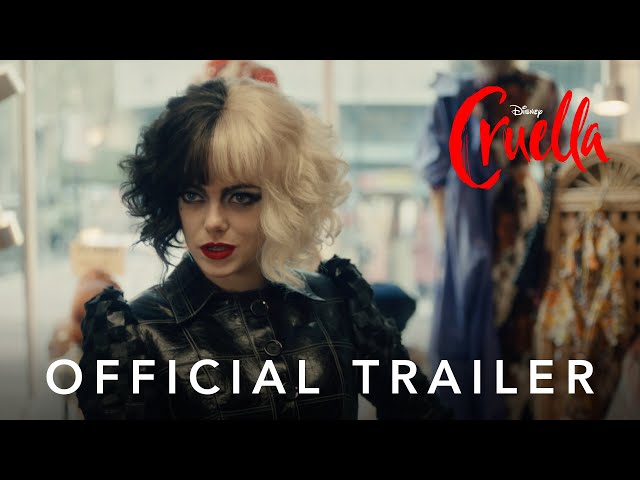 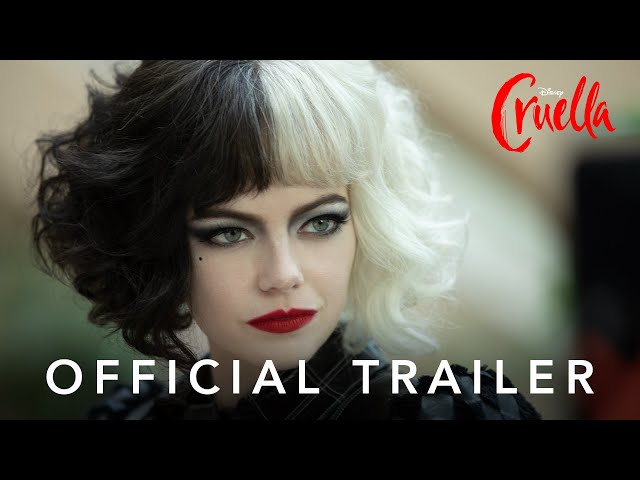 Estella (Emma Stone) is a highly creative child born with poliosis, turning half of her black hair white. She demonstrates a talent for fashion and a cruel streak from an early age, leading her mother Catherine (Emily Beecham) to nickname her "Cruella". Due to Estella's rebellious nature, Catherine pulls her daughter from private school and plans to move to London. On the way there, she stops at a party hosted by the wealthy Baroness von Hellman (Emma Thompson) to ask for financial assistance. Estella witnesses her mother being pushed off a cliff to her death by the Baroness' ferocious Dalmatians. Now an orphan, Estella makes her own way to London and befriends two street urchins named Jasper (Joel Fry) and Horace (Paul Walter Hauser), who adopt her as their sister. To go unnoticed, she starts dyeing her hair red.
Ten years later, Estella is now working with her adoptive brothers as a thief and hustler, honing her fashion skills by crafting elaborate disguises. For her birthday, Jasper and Horace get her a real job as a cleaning woman at the Liberty department store. When the manager refuses to promote her, a drunken Estella remakes one of the window displays and winds up landing a coveted job with the Baroness, who is a renowned but authoritarian haute couture designer. Estella gains the Baroness' confidence but eventually notices her boss wearing a necklace that once belonged to Catherine. After the Baroness claims it had once been stolen by an employee, Estella asks Jasper and Horace to retrieve the necklace.
Estella, now calling herself Cruella and dyeing her hair back to its natural colors, crashes one of the Baroness' parties to steal the necklace. When the Baroness uses a whistle to command her Dalmatians, Estella realizes that she used the same whistle to direct her dogs to murder Catherine. Seeking revenge for her mother's death, Estella taunts the Baroness by appearing at several of her gatherings and upstaging her as Cruella in flamboyant outfits; this enables her to gain publicity for her own label through her childhood friend Anita, now a journalist. Cruella's haughty and arrogant behavior increasingly angers Jasper and Horace, as well as the Baroness, who fires her lawyer Roger (Kayvan Novak) for failing to learn Cruella's true identity. Estella also kidnaps the Baroness' Dalmatians after one of them accidentally swallows her mother's necklace.

Who plays who in the Cruella movie cast?

"Cruella" movie release date was scheduled to be on May 18, 2021 (El Capitan Theatre), on May 27, 2021 (Germany, Hungary) and on May 28, 2021 (United States) distributing by Walt Disney Studios Motion Pictures Argentina and NOS Audiovisuais.

What are Cruella filming details?

"Cruella" movie is rated "PG-13", according to the MPAA film rating system.

What are critics and audiences saying about Cruella movie?

"Cruella" movie got high rating from critics. IMDB rating is 7.4/10. Rotten Tomatoes rating is 73/100. Audiences polled by CinemaScore gave the film an average grade of "A" on a scale ranging from A+ to F.