Is there a trailer for Last Christmas movie? 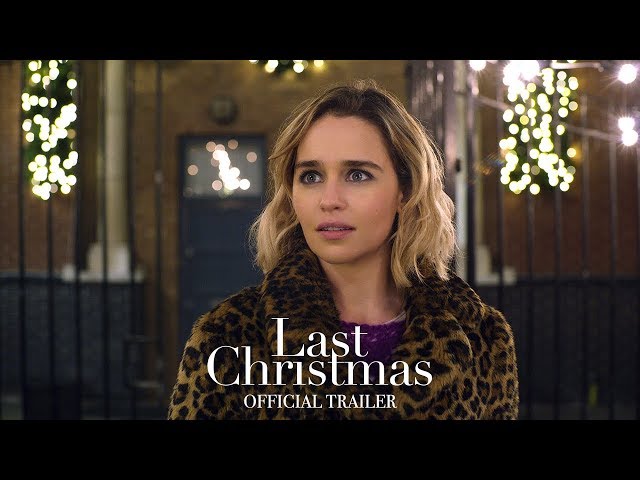 What is Last Christmas movie plot?

Katarina "Kate" Andrich, a young aspiring singer, works a dead-end job as an elf at a year-round Christmas shop in Central London, whose strict but good-hearted owner calls herself "Santa". Kate (Emilia Clarke) is homeless after being forced out by her flatmate. While at work, she notices a man outside staring upwards and talks to him, learning that his name is Tom Webster (Henry Golding).
After an unsuccessful singing audition, Kate sees Tom (Joe Blakemore) again and they go for a walk, where he charms her with his unusual observations of London. Upon isolating herself from her oldest friend, Kate is forced to return to live with her parents, both Yugoslav immigrants. Her mother Petra (Emma Thompson) suffers from depression, and her father Ivan, a former lawyer, works as a minicab driver as he cannot afford to retrain to practise law in the United Kingdom. Kate feels suffocated by her mother, who dotes on her while ignoring Kate's sister, Marta, a successful lawyer who is closeted to their parents.
Kate begins spending more time with Tom, who rides a bike and volunteers at a homeless shelter, which she initially mocks. Looking for Tom, who says he keeps his phone in a cupboard and often disappears for days at a time, she begins helping at the shelter in the hope of running into him, but finds that the staff have never met him.
While celebrating Marta's promotion, Kate spitefully outs Marta to their parents. She then runs into Tom, who takes her back to his apartment. Kate reveals that, a year earlier, she was seriously ill and had to have a heart transplant. Kate says she feels half-dead and questions whether she has the talent to make it as a performer. After opening up to Tom, Kate tries to initiate sex, but he declines.

Who plays who in the Last Christmas movie cast?

Here is the full cast and characters of "Last Christmas" movie. Actors and actresses are sorted mostly in credits order.

What are Last Christmas filming details?

"Last Christmas" movie is rated "PG-13", according to the MPAA film rating system.

What are critics and audiences saying about Last Christmas movie?

"Last Christmas" movie got average rating from critics. IMDB rating is 6.5/10. Rotten Tomatoes rating is 46/100. Audiences polled by CinemaScore gave the film an average grade of "B-" on a scale ranging from A+ to F.

More information and reviews on "Last Christmas" movie you can get on the following websites.

Last Christmas on IMDB is available at:

Last Christmas on Wikipedia is available at: