Is there a trailer for Instant Family movie? 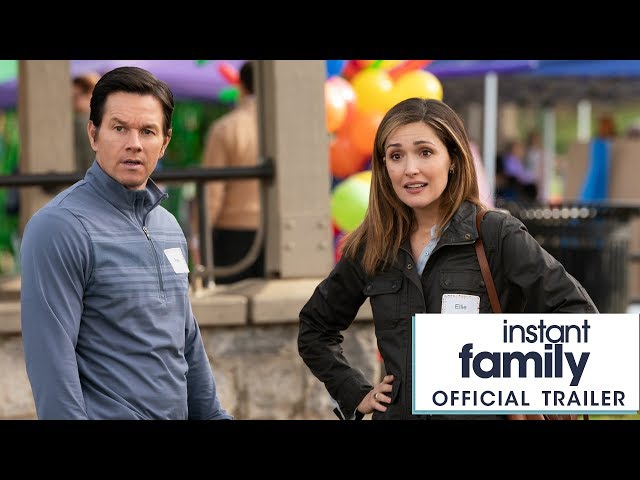 What is Instant Family movie plot?

Husband and wife Pete (Mark Wahlberg) and Ellie Wagner (Rose Byrne), derided by relatives who think they will never have children, consider adoption. They enroll in foster care, led by social workers Karen (Octavia Spencer) and Sharon (Tig Notaro). At a fair to meet foster children, Ellie voices her reluctance to foster/adopt a teen, when they are confronted by 15-year-old Lizzie, who impresses Pete and Ellie.
Karen and Sharon reveal that Lizzie has two siblings, 10-year-old Juan (Gustavo Escobar) and 6-year-old Lita (Julianna Gamiz), and their mother is a drug addict, currently in prison; if they want Lizzie, they have to take Juan and Lita with them. The Wagners' meeting with Lizzie and her siblings does not result in an immediate "cosmic connection," leading them to reconsider. At Thanksgiving dinner with Ellie's family, Pete and Ellie explain they have decided not to adopt. The family admits that no one actually believed they should've adopted to begin with or that they'd actually go through with it, which spurs Pete and Ellie to officially adopt the siblings.
Lizzie, Juan, and Lita move in with the Wagners, whose lives become hectic - Lita refuses to eat anything but potato chips, Juan is extremely emotional and fragile, and Lizzie resents Ellie's attempts to parent them. The Wagners turn to the support group of their fellow foster parents. Pete's mother Sandy wins the siblings over by taking the family to Six Flags, but Lizzie disappears with friends and returns late, prompting Pete to ground her.
One day, as Pete and Ellie confront Lizzie trying to leave with friends, Juan accidentally shoots a nail into his foot. Seeing Pete and Ellie rush Juan to the hospital and comfort Lita, Lizzie begins to warm up to them, and Pete invites her to vent her frustrations by demolishing the kitchen of the house he is renovating. Lita calls Pete "Daddy" after he fixes her doll during Lizzie's soccer practice. At night, Ellie walks into Juan and Lita's room, hearing Juan having a nightmare. After Ellie comforts him, Juan says, "Good night, Mommy." Ellie is overjoyed by this.

Who plays who in the Instant Family movie cast?

Here is the full cast and characters of "Instant Family" movie. Actors and actresses are sorted mostly in credits order.

What are Instant Family filming details?

"Instant Family" movie is rated "PG-13", according to the MPAA film rating system.

What are critics and audiences saying about Instant Family movie?

"Instant Family" movie got high rating from critics. IMDB rating is 7.3/10. Rotten Tomatoes rating is 81/100. The audience also loves the film. Audiences polled by CinemaScore gave the film an average grade of "A" on a scale ranging from A+ to F.

More information and reviews on "Instant Family" movie you can get on the following websites.

Instant Family on IMDB is available at:

Instant Family on Wikipedia is available at: