Is there a trailer for Cargo movie? 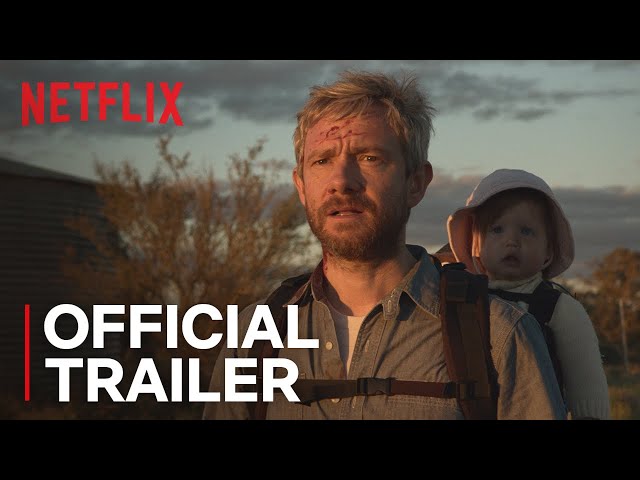 What is Cargo movie plot?

Here is a short review of "Cargo" movie plot summary.

In a world overtaken by a virus that turns people rabid within 48 hours, the Rose family - Andy (Martin Freeman), Kay (Susie Porter) and their baby Rosie - are living safely on a houseboat in rural Australia. Short on food, Andy investigates an abandoned sailboat and retrieves various supplies. Later, Kay goes to collect more, but is attacked by a rabid human inside. Meanwhile, an Aboriginal girl, Thoomi (Simone Landers), attempts to protect her infected father by feeding him wildlife and keeping him locked up while her mother frantically searches for her.
Andy discovers Kay in the houseboat, trying to stop the bleeding from a bite. They set out to find a hospital, but crash after avoiding a man in the middle of the road. Kay is impaled and Andy faints from shock; he wakes hours later and is bitten by a turned Kay as he gets Rosie out of the car. Andy prepares to defend himself against the man, noticing he is infected. Thoomi appears and dissuades Andy from hurting her father.
Andy finds an empty village and meets Etta (Kris McQuade), a schoolteacher, who takes care of him and Rosie for the night. Etta explains that all of her students, most of them Aboriginals, have discarded modern trappings and gone back to the old ways. When Andy and Rosie leaves the next morning, she shows them a picture of Thoomi and her parents and ask Andy to find them so that Rosie can have a second chance.
Andy finds a ute and attempts to hijack it, but is stopped by its trapped owner, Vic (Anthony Hayes). Andy frees him and they escape to Vic's shelter where Andy meets Lorraine, whom he assumes is Vic's wife. He leaves Rosie with Lorraine and leaves with Vic. Vic attracts the infected by imprisoning healthy humans inside cages as bait; Andy is perturbed to see Thoomi trapped. That night, Andy attempts suicide, but Lorraine stops him, confessing that she knows he is infected, and revealing that she is not Vic's wife; he has been holding her captive after he killed her husband. Vic knocks Andy out, and he awakens in the same cage as Thoomi. They agree to help each other escape by using the combined force of many infected to open their cage; they return to the shelter, rendezvousing with Lorraine and Rosie. Vic shoots at them as they escape, and Lorraine uses herself as a shield and is killed.

Who plays who in the Cargo movie cast?

Here is the full cast and characters of "Cargo" movie. Actors and actresses are sorted mostly in credits order.

When is Cargo movie release date?

"Cargo" movie release date was scheduled to be on October 6, 2017 (ADLFF) and on May 18, 2018 (Worldwide) distributing by Netflix, Icon Film Distribution, Umbrella Entertainment and Bankside Films.

What are Cargo filming details?

What are critics and audiences saying about Cargo movie?

"Cargo" movie got high rating from critics. IMDB rating is 6.3/10. Rotten Tomatoes rating is 88/100. The audience also likes the film.

More information and reviews on "Cargo" movie you can get on the following websites.

Cargo on IMDB is available at:

Cargo on Wikipedia is available at: