Is there a trailer for Olaf's Frozen Adventure movie? 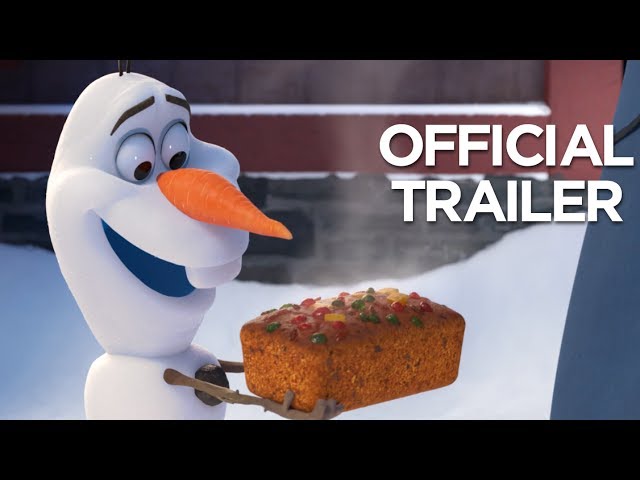 It is the first Christmas season since the gates reopened and Anna (Kristen Bell) and Elsa (Idina Menzel) host a celebration for all of Arendelle. When the townspeople unexpectedly leave early to enjoy their individual holiday traditions, the sisters realize they have no family traditions of their own. Elsa laments the fact that because she had isolated herself most of her life, she and Anna were unable to spend time with each other. Olaf (Josh Gad) decides to look for traditions with Sven's help.
Going through the town, Olaf encounters various family traditions relating to Christmas, Hanukkah and Winter solstice. After a visit to Oaken (Chris Williams), Olaf, Sven and their sleigh full of traditions travel through the snowy tundra only for a piece of coal (from a portable sauna that Oaken had given them) to set the sleigh on fire. They slide down a hill and Olaf and Sven end up separated by a chasm. With only a fruit cake, Olaf attempts to travel through the woods and is attacked by wolves.
Meanwhile, Anna and Elsa discover some forgotten items in their attic. Sven returns to Kristoff (Jonathan Groff) and informs him (in vain), Anna, and Elsa of Olaf's plight. They gather the residents of Arendelle to go look for Olaf. Elsewhere, Olaf manages to escape the wolves, but loses the fruit cake to a hawk and gives up by a tree not too far from the kingdom. Anna and Elsa find Olaf and cheer him up by revealing that they do have a tradition: Himself. After Elsa and Anna had been isolated from each other, the latter began annually sliding cards and dolls of Olaf under the former's door. As they all celebrate the holidays, the hawk drops the fruit cake on Olaf. Upon getting the fruit cake back, Olaf declares it "A Christmas miracle!"

Who plays who in the Olaf's Frozen Adventure movie?

Here is the full cast and characters of "Olaf's Frozen Adventure" movie. Actors and actresses are sorted mostly in credits order.

"Olaf's Frozen Adventure" movie release date was scheduled to be on November 22, 2017 (with Coco) and on November 23, 2017 (Hungary) distributing by Walt Disney Studios Motion Pictures.

The duration of the film is 21 minutes.

What are critics and audiences saying about Olaf's Frozen Adventure movie?

"Olaf's Frozen Adventure" movie got average rating from critics. Rotten Tomatoes rating is 57/100. The audience dislikes the film either.

More information and reviews on "Olaf's Frozen Adventure" movie you can get on the following websites.

Olaf's Frozen Adventure on Wikipedia is available at: