Here are "Breaking In" movie trailer, plot summary, full cast and characters, release date, streaming services and everything we know so far.

Is there a trailer for Breaking In movie?

Universal Pictures on Thursday, January 11, 2018 released the trailer for "Breaking In" you can watch here:
Breaking In - Official Trailer . 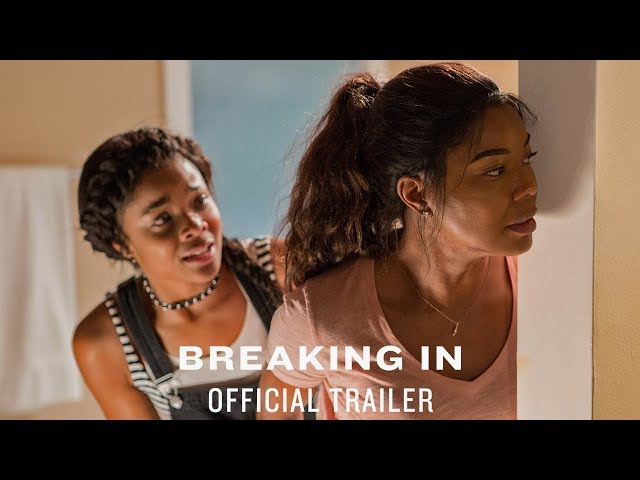 What is Breaking In movie plot?

Here is a short review of "Breaking In" movie plot summary.

After her father Isaac's murder, Shaun Russell (Gabrielle Union) travels with her two children, daughter Jasmine (Ajiona Alexus) and son Glover, to the house where she grew up. Shaun intends to settle her father's estate and sell the remotely located house, which has multiple security features, including a hand-held remote monitor. When they arrive, the security system is offline, but Jasmine soon reactivates it.
Unknown to the family, four offenders - Peter (Mark Furze), Sam (Levi Meaden), Duncan (Richard Cabral), and the crime boss Eddie (Billy Burke) - were in the house before them, burglarizing it. Then Jasmine and Glover are taken hostage while Shaun is locked outside and narrowly escapes an ambush from Peter. Then another altercation sparks when Peter chases Shaun into the woods, where Peter gets knocked out by her. She leaves him bound and gagged, and uses the intercom to call the house. Eddie tells her they only came for the safe and the $4 million they know is inside; Isaac was under investigation by both the FBI and the District Attorney and Sam had learned that he liquidated his assets. The offenders have only 90 minutes from when they sever the phone lines before the security company contacts authorities, so they want to find it and leave quickly.
Concealed in the trees, Shaun sees Maggie, the realtor, arrive with paperwork for the house sale. Eddie greets her at the door, explaining Shaun had gone into town briefly, and attempts to invite her in. Maggie notices Shaun's purse on the table behind Eddie and knows something is wrong and politely declines. When Maggie turns her back on Eddie and leaves, Duncan ambushes her, and slits her throat, which outrages Eddie, as it means Shaun won't be as controllable.

Who plays who in the Breaking In movie cast?

Here is the full cast and characters of "Breaking In" movie. Actors and actresses are sorted mostly in credits order.

When is Breaking In movie release date?

What are Breaking In filming details?

"Breaking In" movie is rated "PG-13", according to the MPAA film rating system.

What are critics and audiences saying about Breaking In movie?

"Breaking In" movie got average rating from critics. IMDB rating is 5.4/10. Rotten Tomatoes rating is 27/100. The audience dislikes the film either. Audiences polled by CinemaScore gave the film an average grade of "B" on a scale ranging from A+ to F.

More information and reviews on "Breaking In" movie you can get on the following websites.

Breaking In on IMDB is available at:

Breaking In on Wikipedia is available at: