Is there a trailer for Velvet Buzzsaw movie? 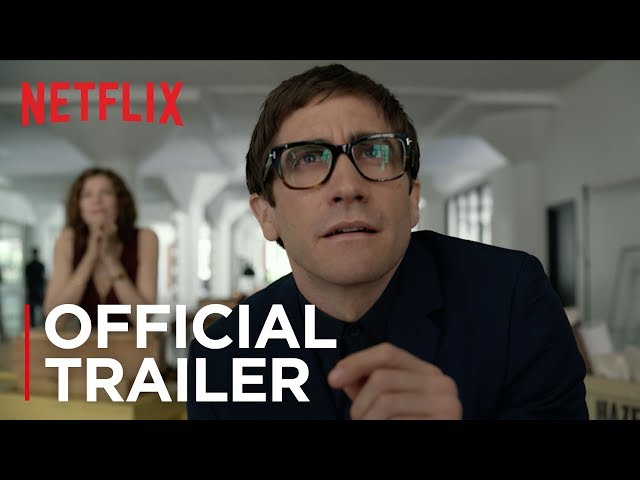 What is Velvet Buzzsaw movie plot?

In Miami, art critic Morf Vandewalt (Jake Gyllenhaal) attends an art exhibition alongside his friend Josephina (Zawe Ashton), who works for Rhodora Haze (Rene Russo), owner of the Haze Gallery and formerly a member of the punk rock band Velvet Buzzsaw. Unfulfilled in his love life with his boyfriend Ed (Sedale Threatt Jr.), Morf starts a sexual relationship with Josephina.
Returning to Los Angeles, Josephina finds a dead man named Vetril Dease (Alan Mandell) in her apartment building and enters his home to discover a myriad of paintings, some of which are partially destroyed. Josephina steals the paintings to show Morf and Rhodora, who become fascinated with Dease. Rhodora decides to exhibit several of his pieces in her gallery to great success. The artworks also enchant Gretchen (Toni Collette), Morf's art curator friend, Piers (John Malkovich), a former artist for the Haze Gallery, and Damrish (Daveed Diggs), an up-and-coming artist.
To ensure the rarity of the paintings, Rhodora orders gallery worker Bryson (Billy Magnussen) to transport half of them to storage. En route, a painting catches fire from his cigarette ash and burns him, causing him to crash into a seemingly abandoned gas station. After he heads inside to clean the burns, Bryson is dragged into a painting by a group of monkey mechanics. Outside, his truck catches fire and burns the remaining Dease paintings.
Researching Dease, Morf discovers he suffered from an abusive childhood that culminated in the murder of his father, after which he was sent to a psychiatric hospital for human experimentation, adding to his mental illness. Jon Dondon (Tom Sturridge), a rival art gallery owner, hires a private investigator to uncover the same story. He attempts to reveal Dease's story to the press but is murdered when a mysterious hand hangs him by his scarf. Coco (Natalia Dyer), Rhodora's former assistant who had just begun working for Jon, discovers his body.

Who plays who in the Velvet Buzzsaw movie cast?

Here is the full cast and characters of "Velvet Buzzsaw" movie. Actors and actresses are sorted mostly in credits order.

"Velvet Buzzsaw" movie release date was scheduled to be on January 27, 2019 (Sundance) and on February 1, 2019 (United States) distributing by Netflix.

What are Velvet Buzzsaw filming details?

"Velvet Buzzsaw" movie is rated "R", according to the MPAA film rating system.

What are critics and audiences saying about Velvet Buzzsaw movie?

"Velvet Buzzsaw" movie got average rating from critics. IMDB rating is 5.7/10. Rotten Tomatoes rating is 61/100. The audience dislikes the film either.

More information and reviews on "Velvet Buzzsaw" movie you can get on the following websites.

You can watch Velvet Buzzsaw online streaming on Netflix:

Velvet Buzzsaw on IMDB is available at:

Velvet Buzzsaw on Wikipedia is available at: