Is there a trailer for Mid90s movie? 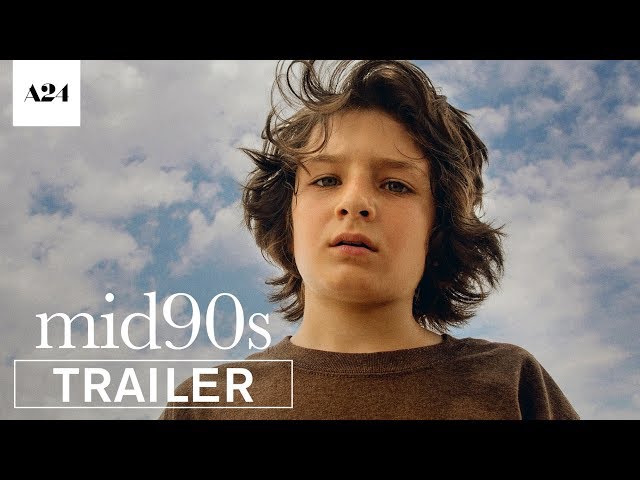 What is Mid90s movie plot?

Here is a short review of "Mid90s" movie plot summary.

Set in 1996, 12-year-old Stevie lives in Palms, Los Angeles with his abusive older brother Ian (Lucas Hedges) and single mother Dabney (Katherine Waterston). One day Stevie bikes past Motor Avenue Skateshop, admires the boastful camaraderie of the skateboarders outside, and returns the following day. Back home, he trades with his brother for a skateboard, brings it to the shop and befriends young skater Ruben (Gio Galicia), who introduces him to the rest of the group: Ray (Na-kel Smith), "Fuckshit", and "Fourth Grade". Although an inexperienced skater, Stevie is drawn to the group and aspires to imitate their daredevil behavior and anti-social attitudes. Stevie is nicknamed "Sunburn" by Ray during a conversation, and his acceptance into the group causes Ruben to resent him.
While attempting a skateboard trick across an open section between two rooftops, Stevie falls and suffers a head injury. Dabney becomes concerned about his turn towards recklessness and his new friends, but Stevie has already made up his mind that he is sticking with the group. Ian has a tense standoff with Fuckshit (Olan Prenatt) as Stevie watches, but Ian appears intimidated by the group and leaves before a fight can break out. Stevie begins smoking, drinking, and experimenting with marijuana. At a party, he has his first sexual experience with a girl named Estee (Alexa Demie).
After Stevie comes home intoxicated, he and Ian get into a violent fight. Ian has an emotional breakdown when Stevie says that he has no friends and, following the conflict, a distressed Stevie attempts to asphyxiate himself with a cord from a Super NES controller, one of several self-harm incidents. The next day, Dabney forbids Stevie from hanging out with the boys. Stevie lashes out and refuses to obey. Having alienated his mother and brother, Stevie sits alone behind the skate shop. Ray consoles Stevie, telling him that even though he thinks his life is bad, the other boys have it worse: Fourth Grade (Ryder McLaughlin) is poor to the point of not being able to afford socks, Ruben's mom is an abusive drug addict, Fuckshit's reckless partying is worsening, and Ray lost his younger brother, who was hit by a car. Ray then takes Stevie out to skate at night and they fall asleep outside the Santa Monica Courthouse.

Who plays who in the Mid90s movie cast?

Here is the full cast and characters of "Mid90s" movie. Actors and actresses are sorted mostly in credits order.

When is Mid90s movie release date?

What are Mid90s filming details?

"Mid90s" movie is rated "R", according to the MPAA film rating system.

What are critics and audiences saying about Mid90s movie?

More information and reviews on "Mid90s" movie you can get on the following websites.

Mid90s on IMDB is available at:

Mid90s on Wikipedia is available at: