Is there a trailer for Action Point movie? 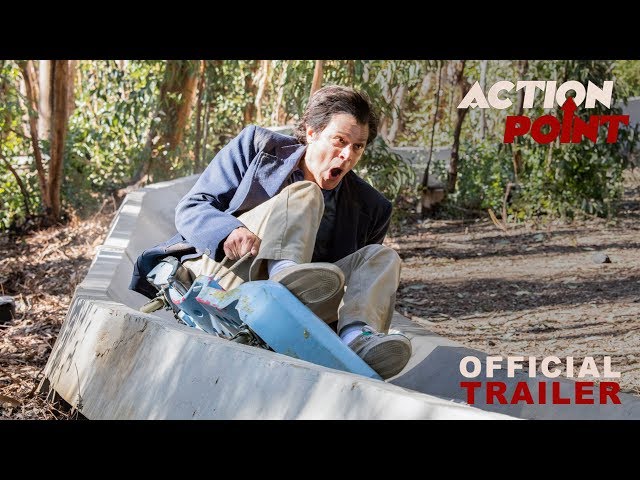 What is Action Point movie plot?

During a visit from his granddaughter, D.C. Carver narrates about his time running an amusement park.
Several years ago, D.C. was the owner of Action Point, a low-rent amusement park with numerous safety hazards; regardless, the park was popular with the youth due to it being the only amusement park in the area. However, a new amusement park named 7 Parks opens up one day and begins to draw customers away from Action Point. D.C. is also pressured by his loan officer Knoblach (Dan Bakkedahl) into selling his land due to his failure to pay off a $100,000 loan. Meanwhile, his estranged teenage daughter Boogie (Eleanor Worthington-Cox) comes to visit and begins to help around the park as a summer job.
One night, D.C. and his staff break into 7 Parks to observe and sabotage the park, but are nearly caught. D.C. realizes that he needs to come up with something big to compete, eventually deciding that they need to start promoting Action Point as a park about what patrons can do, whereas 7 Parks is about what they can't do. He then decides to remove all the safety measures from the rides in an attempt to make the park stand out, causing several people - including himself - to be seriously injured. Boogie also confesses to park lifeguard Benny (Chris Pontius) that the true purpose of her visit is to get D.C. to sign papers that would allow her mother's boyfriend to become her legal guardian.
As a publicity stunt, D.C. and the staff interrupt a local TV broadcast promoting the park which draws in customers, but sends the park into chaos due to the lack of proper rules and regulations. At Boogie's advice, D.C opens up a section for kids, but it is poorly designed causing her to inform legal authorities who then shut the park down.

Who plays who in the Action Point movie cast?

Here is the full cast and characters of "Action Point" movie. Actors and actresses are sorted mostly in credits order.

What are Action Point filming details?

"Action Point" movie is rated "R", according to the MPAA film rating system.

What are critics and audiences saying about Action Point movie?

"Action Point" movie got average rating from critics. IMDB rating is 5.1/10. Rotten Tomatoes rating is 15/100. The audience dislikes the film either. Audiences polled by CinemaScore gave the film an average grade of "C+" on a scale ranging from A+ to F.

More information and reviews on "Action Point" movie you can get on the following websites.

Action Point on IMDB is available at:

Action Point on Wikipedia is available at: