Here are "The Croods: A New Age" movie trailer, plot summary, full cast and characters, release date, streaming services and everything we know so far.

Is there a trailer for The Croods: A New Age movie? 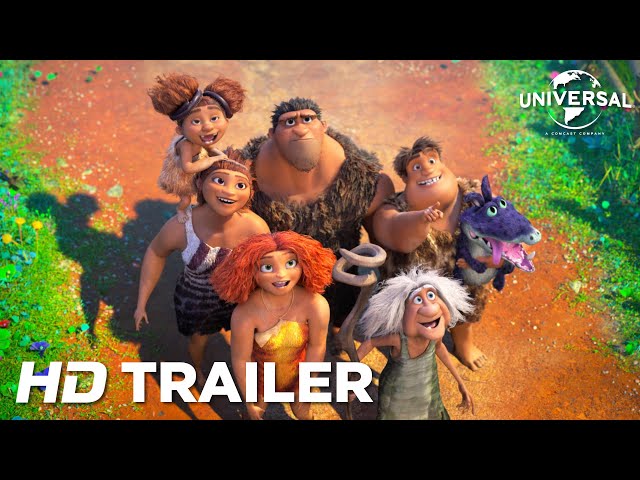 What is The Croods: A New Age movie plot?

Here is a short review of "The Croods: A New Age" movie plot summary.

A flashback shows the death of Guy's parents when he was a kid. As they drown in tar, they tell him to find somewhere called 'tomorrow'. He goes on a long journey and meets a young Belt (Chris Sanders) before taking him along for the ride.
The Croods, along with Guy (Ryan Reynolds) and their pets Chunky and Douglas, are still searching for a place to settle down, all the while surviving many dangerous creatures along the way. Grug (Nicolas Cage) is repeatedly annoyed at Eep (Emma Stone) and Guy's blossoming romance. As Grug walks off in anger, he soon comes across a giant wall and leads the whole pack to them. They are soon caught in a net and are released by the owners of the land, a couple called the Bettermans, Phil (Peter Dinklage) and Hope (Leslie Mann). The Bettermans welcome the Croods to their giant tree-home as house guests, where they meet their daughter and Guy's old friend, Dawn, who immediately befriends Eep. Life with the Bettermans becomes degrading for Grug due to the Bettermans soon reveal themselves to be technologically advanced, better-mannered, and visibly condescending toward the Croods, believing that Guy is better off with them and hatch a scheme to get Guy to leave the Croods. Phil eventually takes Grug to his secret man-cave, a sauna-like place behind some waterfalls, where he manipulates him into believing Guy should leave their pack.
Eep and Dawn soon use Chunky to escape the land and jump their wall for a joyride that ends with a bee stinging Dawn and having her hand swell up. When Eep takes her back home, Guy, upon finding out, chides her for her recklessness, ending with him insensitively calling her a 'cave-girl'. At dinner, tensions rise between the parents, Guy and Eep, especially when Dawn's swelling is revealed. Having enough, the Croods decide to leave in the morning, but Guy decides to stay after he and Eep have a falling out. Soon, the land is attacked by "Punch Monkeys" (monkey-sized but with human-like strength) on account of Grug and Ugga eating a bunch of bananas the Bettermans hoard around their land and have forbidden Grug from eating. Phil reveals he sends the Punch Monkeys the bananas every day so that they leave the Bettermans alone and since Grug and Ugga ate them, the Punch Monkeys get upset and kidnap Grug, Phil, and Guy and take them to their homeland.

Who plays who in the The Croods: A New Age movie?

Here is the full cast and characters of "The Croods: A New Age" movie. Actors and actresses are sorted mostly in credits order.

Nicolas Cage  as Grug Crood a caveman and the patriarch of the Croods
Emma Stone  as Eep Crood a cave girl, Grug's oldest daughter and Guy's girlfriend
Ryan Reynolds  as Guy a cave boy
Peter Dinklage  as Phil Betterman the patriarch of the Bettermans
Leslie Mann  as Hope Betterman the matriarch of the Bettermans and Phil's wife
Kelly Marie Tran  as Dawn Betterman Phil and Hope's daughter and only child
Catherine Keener  as Ugga Crood a cavewoman and Grug's wife
Cloris Leachman  as Gran an old cavewoman
Clark Duke  as Thunk Crood a cave boy and Grug's son
Gabriel Jack  as as a younger Guy
Kailey Crawford  as Sandy Crood a cave girl and Grug's 5-year-old daughter
Chris Sanders  as Belt Guy's pet sloth
James Ryan  as Sash Dawn's pet sloth
Melissa Disney  as Guy's Mom the unnamed mother of Guy
Joel Crawford  as Guy's Dad the unnamed father of Guy
Januel Mercado  as Shaman Monkey the head of the Punch Monkeys
Ryan Naylor  as Creepo Monkey a creepy-eyed member of the Punch Monkeys
Artemis Pebdani  as Additional Voices

When is The Croods: A New Age movie release date?

What are The Croods: A New Age filming details?

"The Croods: A New Age" movie is rated "PG", according to the MPAA film rating system.

What are critics and audiences saying about The Croods: A New Age movie?

"The Croods: A New Age" movie got high rating from critics. IMDB rating is 7/10. Rotten Tomatoes rating is 77/100. Audiences polled by CinemaScore gave the film an average grade of "A" on a scale ranging from A+ to F.

More information and reviews on "The Croods: A New Age" movie you can get on the following websites.

The Croods: A New Age on IMDB is available at:

The Croods: A New Age on Wikipedia is available at: